Here's the Thing about Kathy Griffin: I Don't Care

In case you have been living under a rock, Kathy Griffin posted this photo of herself: 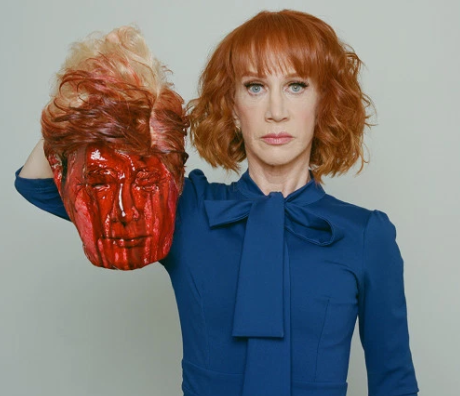 In case you also have face blindness (Prosopagnosia – that’s a real thing! Isn’t it interesting? But I digress), that’s a facsimile of 45’s head she’s holding.

Welp, the internet and media and pundits and everyone went bananas.

Here’s the thing – I don’t care. I’m not a particular fan of hers, I find her abrasive, but I am also happy to say she should do whatever the hell she wants, generally, as long as she’s not harming others. And no, I don’t believe this photo was harmful to Barron Trump, whose father is showing more interest in him, suddenly, than he has since taking office. And I sure as f*** won’t listen to conservatives crying about how wrong it is while actually literally making statements like “imagine if the right had done this to Obama”.

Disgusting but not surprising. This is the left today. They consider this acceptable. Imagine a conservative did this to Obama as POTUS? https://t.co/QdghcbIjS7

Rather, I think we should keep our heads screwed on straight and worry about the fact that 45 doesn’t believe in climate change, actively hates pretty much everyone who’s not a rich white guy (and also his personal friend), appears to be not very smart at all, has no idea how to do his job, breaks laws on the regular while explaining that it doesn’t count if you’re president, fraternizes with murderers and despots, is a child rapist (alleged – whatever, I believe it), and is generally a horrific human being that I am regularly embarrassed and abjectly horrified by.

Let’s take all our outrage about a comedian and refocus it on doing what we need to do – resisting this nonsense.