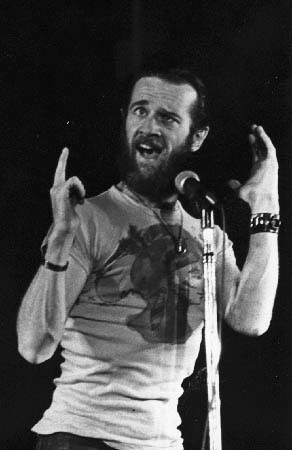 George Carlin was still alive so things were automatically better then.  I doubt he wrote the crap that follows but someone spent time imitating one of the greatest satirists/comics we will ever know so go on and pretend George wrote it.  What?  You’ve got something better to do?

New Rule: No more gift  registries. You know, it used to be just for weddings. Now it’s for babies and  new homes and graduations from rehab. Picking out the stuff you want and having  other people buy it for you isn’t gift giving; it’s the white people version of  looting.

New Rule: Stop giving me that pop-up ad for classmates.com! There’s a  reason you don’t talk to people for 25 years. Because you don’t particularly  like them! Besides, I already know what the captain of the football team is doing these days — mowing my lawn.

New Rule: Don’t eat anything  that’s served to you out a window unless you’re a seagull. People are acting all  shocked that a human finger was found in a bowl of Wendy’s chili. Hey, it cost less than a dollar. What did you expect it to contain:  lobster?

New  Rule: Stop saying that teenage boys who have sex with their hot, blonde teachers are permanently damaged . I have a better description for these kids:  “Lucky bastards.”

New Rule: If you need to shave and you still collect baseball cards, you’re a dope. If you’re a kid, the cards are keep sakes of your idols. If you’re a grown man, they’re pictures of men.

New Rule: Ladies, leave your eyebrows alone. Here’s how much men care about your eyebrows: Do you have two of them? Good, we’re done.

New Rule:  Stop screwing with old people. Target is introducing a redesigned pill bottle that’s square, with a bigger label. And the top is now the bottom. And by the time grandpa figures out how to open it, his ass will be in the morgue.  Congratulations, Target, you just solved the Social Security crisis.

New Rule: The more complicated the Starbucks order, the bigger the asshole. If you walk into a Starbucks and order a ‘decaf grandee, half-soy,  half-low fat, iced vanilla, double-shot, gingerbread cappuccino, extra dry,  light ice, with one Sweet-n’-Low, and One NutraSweet,’ ooooh, you’re a huge asshole.

New Rule: I’m not the cashier! By the time I look up from sliding my card, entering My PIN number, pressing ‘Enter,’ verifying the  amount, deciding, no, I don’t want Cash Back, and pressing ‘Enter’ again, the kid who is supposed to be ringing me up is standing there eating my Almond Joy.

New Rule: Just because your tattoo has Chinese characters in it doesn’t make you Spiritual. It’s right above the crack of your ass. And it translates to ‘beef with broccoli.’ The last time you did anything spiritual, you were praying to God you weren’t pregnant. You’re not spiritual. You’re just  high.

New Rule:If you’re going to insist on making movies based on crappy old television shows, then you have to give everyone in the Cineplex a remote so we can see what’s playing on the other screens. Let’s remember the reason something was a television show in the first place is that the idea wasn’t good enough to be a movie.

New Rule: And  this one is long overdue: No more bathroom attendants. After I zip up, some guy is offering me a towel and a mint like I just had sex with George Michael. I can’t even tell If he’s supposed to be there, or just some freak with a fetish.  I don’t want to be on your webcam, dude. I just want to wash my hands

New Rule: When I ask how old your toddler is, I don’t need to  hear ’27 months.’ ‘He’s two’ will do just fine. He’s not a cheese. And I didn’t really care in the first place.

New Rule: If you ever hope to be a credible adult and want a job that pays better than minimum wage, then for God’s sake don’t pierce or tattoo every available piece of flesh. If so, then plan your future around saying, ‘Do you want fries with that?’