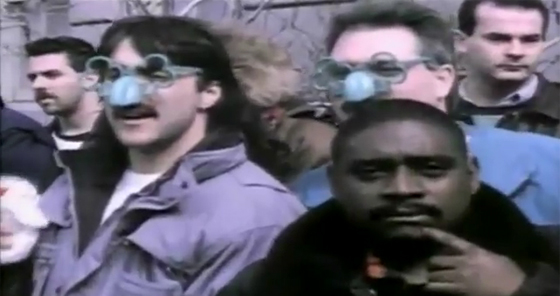 The pic above is from the video for “Jump Around” by House of Pain.  And the video is what I really want to talk about, because it captures, better than a lot of things that have tried, what it’s like to go to a bar in the Northeast in the winter.  Please note that everyone in the bar is wearing 47 layers.  And that’s not because they are rappers.  It’s because it is cold.  And to get to the bar you usually have to walk.  So in order to not freeze your ass off, you need to bundle up.

It sucks.  Because once you get into the bar you are too hot and unless you go out at like, 6pm there is nowhere to sit.  And only TV bars have coat racks where the regulars come in and hang up their shit and then go over to the bar.  In my world, if you put your coat anywhere it would be immediately stolen and the “bar” was a place you would never touch that consisted of a bartender that would squint as he tried to hear your order (I guess that helps you hear) and then you try to figure out how to hold three beers and your change with one hand, your arm stretched as far as it can stretch, you on your tip toes scrabbling like your true love is falling into a volcano while some short guy’s head is in your armpit.

And all the coats and scarves and crap make girls impossible to identify.  What’s in there?  A skinny chick with 15 sweaters?  A thin turtleneck stretched tautly over a bunch of meat?  Who knows?  You can’t even see how many chins there are because everything is zippered and buttoned up.  Taking a chick like that home is like winning a mystery prize.  And it is no treat for the ladies either.  You know what it gets so cold that your nose runs but your face is too cold to know?  Yeah.  Come get some of that, girls.  And

So what was I talking about?  Oh, right, House of Pain.  It’s a good song.  And watch closely when they say “I came to drop bombs”.  Heh.  Video and lyrics after the jump.

House of Pain – Jump Around

Get up, pack it in, let me begin
I came to win, battle me that’s a sin
I won’t tear the sack up, punk you’d better back up
Try and play the role and the whole crew will act up

Get up, stand up, come on, throw your hands up
If you’ve got the feelin’ jump across the ceilin’
Muggs is a funk fest, someone’s talkin’ junk
Yo, I’ll bust ’em in the eye and then I’ll take the punks home

Feel it, funk it, amps it are junkin’
And I got more rhymes than there’s cops that are dunkin’
Donuts shop, sure ’nuff I got props from the kids on the Hill
Plus my mom and my pops
I came to get down, I came to get down
So get out your seats and jump around

I’ll serve your ass like John McEnroe
If your girl steps up, I’m smackin’ the hoe
Word to your moms I came to drop bombs
I got more rhymes than the Bible’s got Psalms

But if you do you’re a fool, ’cause I duel to the death
Try and step to me you’ll take your last breath
I gots the skill, come get your fill
‘Cause when I shoot ta give, I shoot to kill
I came to get down, I came to get down
So get out your seats and jump around

Listen to the sound that pounds, I jump around
I’m no clown, I get down
To the funk, listen to the wig out
And step to the rear, dear, ’cause I’m here

The P to the E to the T E rockin’
The runs in your stockin’
So hon, put the lock in
Chillin’ with the House Of Pain
Blood stains the ground, huh, I jump around

I’m the cream of the crop, I rise to the top
I never eat a pig ’cause a pig is a cop
Or better yet a Terminator, like Arnold Schwarzenegger
Try’n to play me out like as if my name was Sega

But I ain’t going out like no punk bitch
Get used to one style and you know I might switch
It up up and around, then buck, buck you down
Put out your head then you wake up in the Dawn of the Dead