How did that just happen? 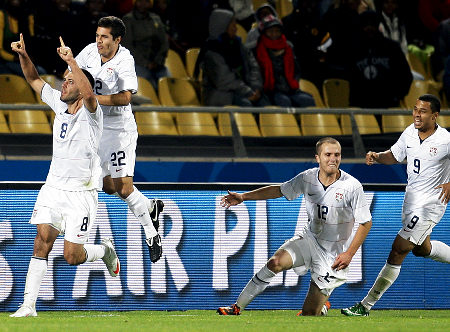 All last week United State soccer was getting smoked by the likes of Brazil and Italy. The downward spiral was disgusting. They had a 1-0 lead against Italy in game one and things looked great. Then, they took a red card and went down a man. Things fell apart. They couldn’t hold and lost 3-1. Then, they were completely outclassed by Brazil in a 3-0 defeat.

They looked done. And then? Well, Sunday came around. Needing Brazil to win 3-0 against Italy and for the US to beat Egypt 3-0, it was improbable that USA would advance in this Tournament.


Here’s the thing with soccer in the United States…only a moron doesn’t realize that this country is going to be a power in International soccer at some point. I’m not saying when, but, it’s an inevitability.

This group of players is better than any other team that the US has had. Talent wise. The team they sent to South Africa for the World Cup next year will certainly be the best group of United States soccer players ever.

The country continues to get better.

The problem has been putting it all together.

In the 90s, USA soccer succeeded based more on heart rather than talent. Now, this team has shortcomings that revolve around lack of heart.

When the USA soccer team feels like they can beat you, good things can happen.

That’s what happened against Egypt. They completely dominated a team that gave Brazil a barnburner and defeated Italy. Egypt wasn’t even in this game, they took lifeless shots while the US got tons of good chances. That usually happens to the American team.

The US will most likely get trounced by Spain on Wednesday, but what they showed Sunday was some of that heart and grit that their teams have found success with in the past. If they continue to become more and more talented, and keep the tenacious mentality that every Champion has, it is a team that can move forward in leaps.

They can not play as if they are supposed to lose and are OK with just a good result. That’s what happened against Italy. They got up 1-0 and would have been OK with the Italians slipping in a goal to finish it at 1-1.

Sunday, the Americans fought not just to win against Egypt, but they went for the 3-0 victory that they needed.