Hurley is making a run for smartest man on that island 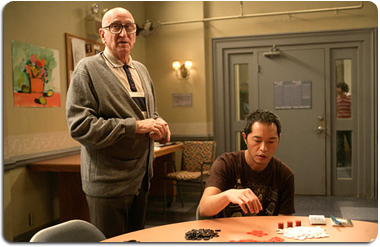 This Picture is not from Lost, I'm just trying to see if I can freak people out, man

Certainly have to say this up front, but, fuck ’em for showing a recap show next week. Don’t try to fire it up as seeing it through a different perspective, because that could be cool. Yet, this won’t be. It’ll be a fucking recap show when we were expecting new ones non-stop.

I am a fan of scenes with Hurley and Miles. The stuff with Hurley writing Star Wars 2 and Miles thinking it was a diary and what have you was solid. However, Hurley is mistaken about the Ewoks, those cats can get down.

Here’s a guy who is no doubt making a push for dumbest man on the island: dude who went up to Sawyer and was like, bro, I seen this tape and you got little Ben some help, but, let me follow you into your house where we’ll be alone together. How does that guy not realize he is about to get punched in the face? He should just be happy Sawyer didn’t jack him with a candlestick or something.

When the numbers were getting banged into the hatch, if I’m in Hurley’s spot, I’m doing something. I’m not entirely sure what, but I think it would be something similar to going up there and scratching off the numbers or something. Punching somebody works as well.

On the plus side for Hurley, he is at least capitalizing on the time travel by writing Star Wars. But, really, that seems a bit much and Biff Tanner would certainly laugh at him.

So, that dude from the Van that jacked up Miles for a hot second, he’s on the island, right? He also has weapons and was pullin’ stunts on Lapidus. Not cool. He also referenced teams and he isn’t on Charles Widmore’s team, but is planning on winning. Which, you would think would be a good thing because Widmore is evil as fuck, but with Lost who the hell knows.

Since everyone has theories, and hey, we want YOURS in the comments!, here’s one on the teams: Widmore is the Yankees. Ben is the Red Sox. This dude from the van is the Tampa Bay Rays. Widmore is clearly a douchebag and rich as shit, so that one is obvious. Then, you have Ben, who might not be as rich, but gets rich off the backs of those desperate to take down the Yankees/Widmore. People like Ben/Red Sox for a while because they fight against Widmore, but then you realize, woah, those dudes are wearing a nice array of popped collars and are quite the douchebags themselves. So, you grow to hate them. Then, you have these dudes in the van who did not have the 3.2 mill for Miles, so are more grit than rich and flush with funds.

Back to the guy that Sawyer jacked up…I know he’s been playing it low key back in the 70s, but really, is he playing it that tight where someone would feel comfortable stepping into an isolated location with him after breaking out evidence against him? He didn’t just randomly flip out on someone one day over a period of THREE YEARS? He didn’t do anything to instill some fear into these people? Disappointed.

When Miles was looking at his pops through the window holding lil miles, was he thinking, “if I went in there now and told that kid, ‘seriously, don’t do that whole phase with the piercings and the paint the nails black you’ll look like a dipshit’ would the kid remember it?”

I had some disdain for Kate when watching this episode. Can’t remember what for, though.

All in all, this seemed like a lot of filler, but the van dudes was a pretty interesting twist. And, I wanted a Miles story, so I liked it. Even though they probably should have let the Miles/VideoDoc father reveal come out in a more dramatic way. Not in a know it is coming for 15 minutes type of way.

Oh, and Faraday is back. Not sure where the fuck he went. Aside from Ann Arbor. So, safe guess is just that he re-upped on their weed supply because for some reason you can’t grow good pot on the Island.

Theories on the show and general thoughts on the episode in this thread. Please? I don’t really know how to ask people questions to drum up questions yet. Acadia is really good at that, and I pretty much just type. So, damnit, comment on Lost.