I am slow and just started Penny Dreadful 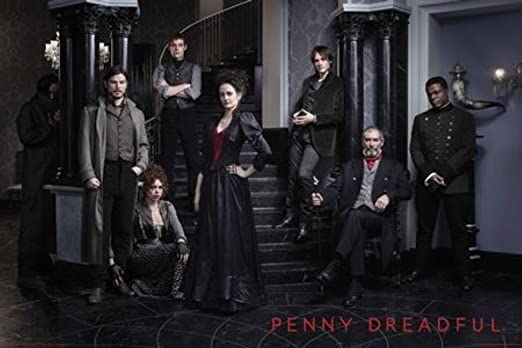 Honestly if I just listened to people then I am sure my life would be a lot better off.  Take M. who cuts my hair.  I have known her for years and she is a HUGE horror fan and her boyfriend does some sick cosplays so you would think I would listen to her.  And I DO!  I just don’t do what she says to do for like 100 years.  She has been talking to me about Marianne on Netflix since it came out and she was right, it was great!

But nothing compares to how much she talked about Penny Dreadful.  I mean the show premiered April 28, 2014.  SIX YEARS AGO!  And she would ask me once a month if I had watched it yet.  Now, the list of things I have to watch is pretty long, and I will admit that the cast did not really wow me.  Timothy Dalton is cool but I had not heard of him since he was James Bond for 1/2 hour. Josh Hartnett just seems like he is happy to be wherever he is. Harry John Newman Treadaway was good as Brady Hartsfield on Mr. Mercedes so that was a draw, and then there is Eva Green.

I like her character but my gah she looks like Gollum. And I KNOW there is something wrong with me because she is an acclaimed sexy actress etc. But for me she is just a good actress who isn’t sexy.  To each their own, I guess.  I know the guy who plays Dorian Gray is supposed to be super sexy, too and I don’t buy that, either.  He looks like Boone from Lost.  And I am not apologizing for calling out the relative sexiness of the characters because 1/2 the show is sex because it is on a pay channel.  Why they insist on putting in a lot of sexy parts when there is no need of it baffles me.

As for the plot, I dig it.  It is like if someone mixed the Universal Dark Universe (please let that be a success eventually) with the League of Extraordinary Gentlemen.  I might not have been a super fan of some of the side trips, but the main story has captivated me (and Mrs. Ac.).  In fact, it has sort of become our new Sunday show.  We devoured the first season and now are going to watch season two on Sunday nights since Westworld is over.

So we are going to start season two tonight and I am really looking forward to it.  And after that’s over, we will have to decide if we are going to pay for Showtime to watch season 3.  LOL j/k – there is no way I am paying for anything else. I got to watch it in the first place because it was on Netflix finally.

Hey, now that I think about it – maybe THAT is why I didn’t watch it. It wasn’t the fact that I don’t listen, it is because I am cheap!  That doesn’t explain Marianne but I will talk about that later.  Watch Penny Dreadful it’s good stuff!