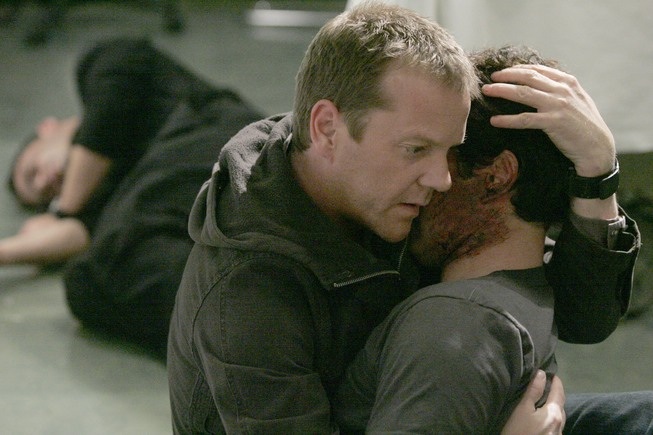 Oh, It's like I started breathing on the night we kissed, And I can't remember what I ever did before.

And there ain’t no nothing we can’t love each other through.

What would we do baby, Without Us?

Gonna have to throw the jump in here early, figure some folks might have DVRd the shit out of 24 and what not.


Can’t say I saw that ending coming. Which is pretty good from the folks at 24. I don’t think they just pulled out the dartboard and randomly shuffled together possible outcomes. I figured from the point that Tony revealed himself to be working with Bill and Chloe that at some point Tony would once again find his way stumbling back over to the darkside.

So, knowing it was coming at some point, I felt that the way they hit the audience with it was very well done. The other big thing about it is that it really leaves the viewers wondering what is still left to come. Tony didn’t leave himself gray areas when he killed Agent Moss the way he did. Dude is cold asking for trouble and Bauer will, hopefully, bring it.

I’m hoping the season reveals some other big time villain that Tony is working for. The FBI takes him out. Because of Jack having his illness and lame conversations with his daughter on the sidelines, Tony slips away. This sets up another season where Jack is hunting Tony.

Sure, if you take the time to think things like, “wait, if Tony is bad, why’d he do all that shit with going out of his way to save the day when it comes to the biochemicals and blowing them up?” then this likely makes very little sense.

But, at the same time, if you’re getting hung up on details like this, you probably aren’t a 24 fan to begin with. I mean, I know a lot of smart people who watch 24 and they realize that while watching 24 they won’t win any nobel prizes. I can’t imagine someone watching this episode and having this leap of logic be that last straw.

The season was set up as Jack vs. Tony in the first clips that came out. Looks like the audience is finally going to get that.