I Solved the Immigration Problem 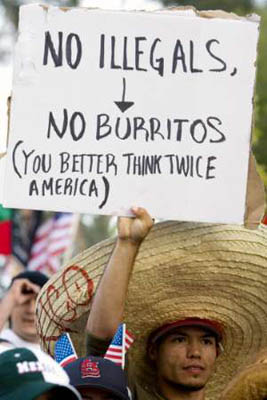 You know I don’t usually get involved in politics (my Racist Tea Party Tumblr usually handles that) but all the news about COMPREHENSIVE IMMIGRATION REFORM compels me to step in and make sure that whatever stupid deal that Washington comes up with is pushed aside to make way for my super genius plan that will not only solve the immigration issue, but also revitalize the economy and allow our politicians to focus on other crap that we can later argue about on the Internet.

Anyway – the crux of the problem is that there are a bunch of people whooping it up inside America who didn’t pay to get in.  And while people sort of recognize that it would be a pain to go wandering around looking for all the people who snuck through the gate, they also agree that letting more jerks sneak in is not going to work.  So since I am too lazy to worry about who is already here, I am going to focus on keeping people out.

So since my “kick out Texas” plan is not getting any traction, I need to go to plan B.  Here it is.

Everyone is belly aching about border security.  We need a fence.  We need drones.  We need fat dummies in lawn chairs “on patrol”.  Bah! We don’t need any of that.  We need to think big.  We need to solve the border issue while we stimulate the economy.  So if a fence would cost a few billion bucks and employ a bunch of people, think about how many people TWO fences would employ (hint: twice as many).  And then since we would already have two fences running next to each other, the only sensible thing to do is build a prison in between the fences.

Make the entire border between the United States and Mexico a big giant prison. 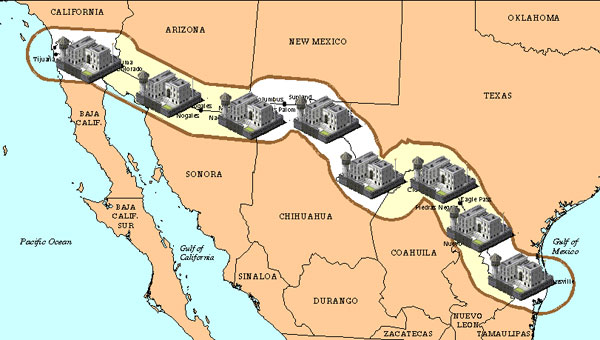 Based on how long the guys who painted my house took, I estimate that if we use only Latin-American  immigrants to build the prison, it will be more secure than Alcatraz and be finished in about a month.  Then Mexico and the US won’t need any other prisons.  We could just share the new big one.  And sneaking over the border?  That’s done with.  Even if you could dig your way under the first fence all you would be doing is breaking INTO A PRISON.  The problem solves itself!

The spot between San Diego and Tijuana would be the conjugal visit area and gift shop where people could buy discount prescriptions, sombreros and donkey shows and our southern neighbors could get fish tacos and Padres tickets (sorry Mexico, it’s all they have).  And to the people who are going to complain that they don’t want to have to look at a prison I say:  you live in a frigging desert.  Just turn around 180 degrees or watch a Road Runner cartoon.  It’s the same thing.

And how do we pay for it?  Well, if we build the prison fast enough (think of it as a giant lasso) we will probably catch a bunch of drug dealers and those guys always have TONS of money on them.  They will already be in prison so we can confiscate their money and their drugs, sell the drugs to some other country (prolly The Netherlands) and boom.  Free prison!

Oh and I am not just focusing on the southern border. I would also build a giant wall around Quebec and keep those tiny-bathing-suit-wearing, no tipping, hairy, French-speaking, want-to-haggle-on-the-price-of EVERYTHING Queebs in their own country.  Thus ends the Canadian part of the border security issue.  Who cares if the rest of Canada comes down here?  What are they gonna do?  Be polite all over us?

So there you have it.  No complicated legislation.  Just good old Mexican hard work and American exploitation.  And when it is all done we will have solved illegal immigration and finally built a prison cooler than the one in Escape from New York.  You’re welcome.