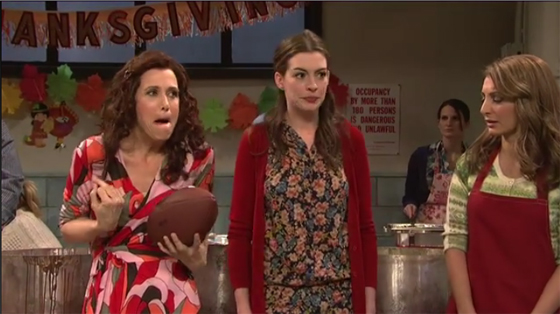 I’ve heard that some snooty TV types have complained about Penelope as a character on SNL but they can all blow me (unless they’re dudes).  I like the character and watching it I think that I’ve figured out one reason why Kristen Wiig is so good.  She seems to be one of the few regular players who bothers to learn all her lines.  Or else she is making it all up as she goes, which would be equally awesome.

Anne Hathaway does a good job with the obligatory “imitating Penelope” segment.  She’s decent with comedy, as was Scarlett Johansson last week.  I could see either of them doing well in a sort of buddy comedy.  Throw Kristen in there, too.  In fact, I think I have figured out the plot already:

Anne plays Bridget, a bookworm who goes to college while living at home with her mom.  Scarlett plays Babette, a free-wheeling socialite who goes to the same college but lives in the dorm.  Kristen Wiig plays Anne’s mom.

In the first act, we see Anne being comedically awkward and Scarlett being over-the-top stuck up.  And then, wouldn’t you know it, this odd couple gets stuck being lab partners!  So, with their grades on the line, they come up with a hillarious project to work on, and with the help of the mom (who mostly helps by being crazy!) they submit their project and win over the teacher and get an A!

Wait, that’s not a very long movie.  So I guess the last 20 minutes will be Bridget and Babette making out topless while Kristen Wiig juggles.  Or isn’t there.  Anyway they are topless and they make out and then they graduate or some shit.  Nobody will care by then, I promise.  I’m awesome at movies.

Bonus Reel!  For some reason when I was watching the SNL clip Hulu thought I would be interested in this Trish Stratus / Victoria match from 2002.  Maybe it was because they make out topless at the end.  I dunno.