I Will Watch This 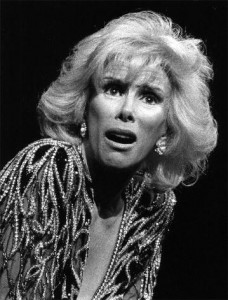 This is Joan before she became a surgical caricature of herself.

I will watch this and then hate myself.

Mark Burnett, pioneer of reality television, and Joan Rivers, pioneer of foul-mouthed insult comedy, have joined forces for a show. It’s called “How’d You Get So Rich?,” but a better title would be “How’d She Go So Soft?”

Then the article tells me that it is on TV Land. Uh, excuse me, is TV Land not about Wings and Cheers reruns?

Then the article tells me it is basically Joan Rivers interviewing rich people about how they got rich. Note that she will be interviewing them. Not verbally assaulting them while her daughter throws a hissy fit. Okay, so, maybe I will not watch this show after all. Really, Mark Burnett? You’re going to swing and miss this badly?