If I were a Reporter 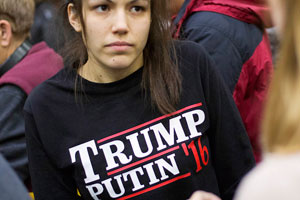 OK so by now everyone knows that Trump fired FBI Director Comey.  And I am PRETTY sure that everyone knows that the reason they gave (Comey was mean to Hillary Clinton) is sort of bogus considering that Trump was super jazzed that Comey sent that letter near the end of the campaign.  Now, Hillary says that is why she lost, which might or might not be true.  But nobody thinks it HELPED her.  And I have been watching the news this morning (parts of Mika Brzezinski are hypnotic and I love Mark Halperin) and nobody has asked the question that I would ask.

Since President Trump fired Director Comey ONLY because of the weird email/Clinton/letter thing, will he now apologize to Secretary Clinton?  I mean, now that he has seen the reality of what was done to her, will he not extend a hand and say that he regrets that this affront to justice might have had ANY effect on the robust campaign that the President won?

I mean, he just admitted by firing the guy that the letter thing was trash, right?  So wouldn’t he apologize?

And don’t get me wrong.  I don’t really think that he will apologize.  I am asking all of you if you think any reporters will ask this question.  Don’t they work for us, too?

Hey, Congress, now is the time to remember you are CO-EQUAL.  Time to drop the King stuff.  Special Prosecutor or every one of you should be voted out next year.