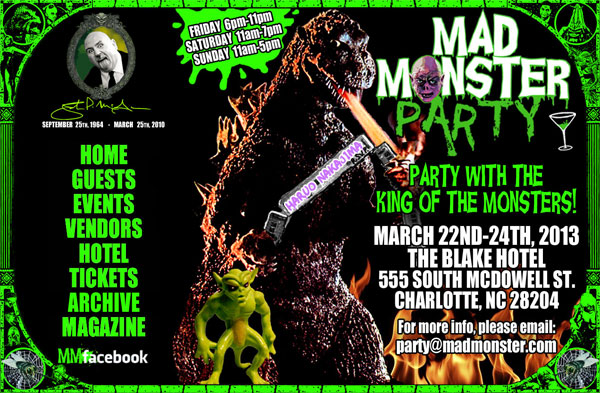 How far would you go to see some stuff about Halloween in March and potentially pay to get an autograph or a picture with people you are aware of but don’t really know?  Well apparently my own personal answer to that question is: “about 15 miles” because in a few weeks I am totally going to the Mad Monster Party right here in Charlotte.  With a website that bad the show will have to be awesome.

I went to Comic Con in San Diego in like, 1999 I think it was.  I would love to say it was this glorious experience but I had no idea what was going on.  I probably squandered a great chance to meet some nerd.  But I will make up for that with a vengeance when I hit the show floor and take in some of these awesome events:

And no, I am not being sarcastic.  I learned how not to be too cool for school when I was actually in school.  Since I went to a Jesuit high school I had to go on retreats.  And there is NOTHING you want to act too cool for more than a retreat.  But once you realized you were trapped there and everyone was in the same boat, you could have a good time and not get molested by the teachers.  All that training has prepared me to have fun and not get molested at the convention so I am pretty excited.

A guy I work with goes to these kind of things in NYC all the time.  He has seen the Iron Sheik 100 times.  But look at the lineup I’m going to be rocking (in no particular order of awesomeness)!

I could go on, but if I did I would have to start explaining who they are.  Then you would go:  “Ohhhhh!  I know that guy!”  But it is not as cool that way.  The whole list is here if you care.  And if you want to come to the show and meet me, let me know.  How hard could it be to find someone you don’t know in a place where everyone is wearing a costume?  Maybe I will go as Waldo!

Seriously I am going, though.