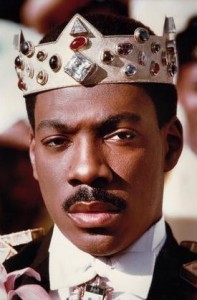 I have recently been placed in charge of garbage. When you think of garbage, think of Akeem!

Eddie Murphy’s new movie, Imagine That, opened making $5.7 million this weekend. I wasn’t bugged by Eddie Murphy doing all those kids movies. They were successful. But, now he is even bombing these kids movies?

I’m not entirely sure I can handle that. Like, I could flip to Daddy Day Care and while I would not enjoy myself while watching, I would understand the thought process behind it.

And, I know what you’re thinking: He’s been bombing TONS. Right, he has. But, lately, it’s just been like this painful thing.

Before, it was like, OK, hey, Murphy will be back on top of things, he’s just making terrible decisions. But, we’re to the point where this is an unforgivable clusterfuck of bad decisions. It’s like, I will no doubt be excited for Beverly Hills Cop IV despite the third being awful, but if he puts out anymore bombs before that, any one bomb could be the tipping point that makes me not want to give a chance to the next Beverly Hills Cop.

Which ain’t good. At least let me continue to pretend like the next Beverly Hills Cop can be good.