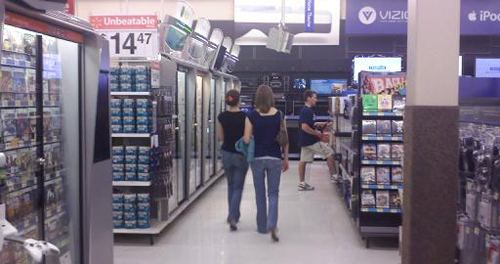 In a second that dude is gonna notice those chicks and be embarrassed.

You know those people who hate Wal-Mart?  Like, HATE it?  The people who have decided that all the sins of the evil corporation can never be wiped away no matter what the circumstances?  The people who figure that the people who work at Wal-Mart were somehow taken prisoner or tricked into not getting a different job?  Or the people who understand that it has been the company’s policy to drive single item businesses into the ground (like bike shops and pharmacies) by using their margins and voulme to undercut prices.  Yes, they have done that in the past and gotten busted for it.  They have done some shitty things.

But they have also done some good things.  They buy rainforest land equal to the footprint of every store they open (I can only presume to preserve it and not…burn it) and they can probably influence the way the world does business more than any government could ever hope to.  They are too big and they are scary as shit.  Their prices are low and they almost always win.  So lots of people hate them.

Until now.  Until the clown commercial.  Now whatever they did before is forgiven.  And whatever they do going forward will be compared to this.  Good job Wal-Mart.  Now you can be known for something other than killing those people.