Iran – What the Hell Would You Do? 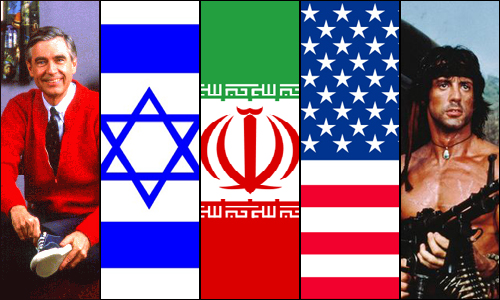 Well, it took a week, but the Iranian bosses finally squashed all the protestors.  If you don’t know about all the trouble over the weekend and the Youtube video of the girl getting killed and Twitter and all the other shit then you probably need to stop reading this and go to a real news website.  But, if you refuse, and want the deets according to me – then here goes: (deep breath)

Iran had an election between that little guy who said Israel should be annihilated and some other guy and the election results were released way too quickly and the challenger got smoked (even in his own home town) and like a million people cried bullshit and at first the guys really in charge (they have a guy actually called the Supreme Leader – like their country is a cartoon crime syndicate) first said it was legit then they said maybe it wasn’t but then they finally said it was legit and the people better stop bitching and protesting or else there would be trouble and the people kept protesting and there was trouble and tear gas and shootings (some before the announced crack downs, most after) and the media is being shut out and people are trying to get the word out on Twitter and YouTube and shit like that so now everyone is wondering what it going to happen next and some here in the States are saying we should be supporting the protestors and others are saying we need to keep quiet and a girl got shot and they put a video up on YouTube and everyone assumes that it is legit but it isn’t like she was holding a sign or anything.

OK – so now that there are some basic facts out there – what the hell do we do?  Here are some observations and questions and I really want to know what you think.

Apparently, the Iranian protesters also need to protect themselves from Swine Flu.

I figure some of you must have an opinion on this complex issue.  When I watched the McLaughlin Group this weekend, Eleanor Clift and Pat Buchanan agreed with what the President had done so far, but Monica Crowley (rawr) didn’t so obviously there is not a consensus.

But what do YOU think?  That’s what I want to know.