It Doesn’t MATTER What His Name Is 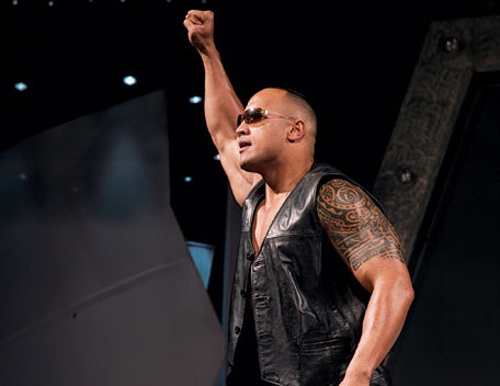 Dwayne Johnson, formerly known as Dwayne “The Rock” Johnson formerly known as “The Rock”, has a new movie coming out this weekend.  Rehash of Witch Mountain seems to be the kind of movie The Rock wants to make now.  Family friendly.  Big giant tattooed guy as happy go lucky friend to children.  He better goddamn stop it.  He needs to be funny and also fight people.  Remember The Rundown or Rundown or whatever the hell it was called?  Action + Comedy = good Rock.  Same with Get Smart.  A little funny a little physical, and you get a good show.

Which brings me back to his roots.  The Rock was a wrestler.  Since he took “The Rock” out of his name, he may want people to forget that, but I think he should bring it up every day.  If you watched wrestling in the late 90’s and early 00’s (like everyone did) then you remember him.  Didn’t matter if he was a good guy or a bad guy, he was funny and he kicked ass.  So I spent way too much time trying to find some good old clips of The Rock.  People on Youtube really need to cut things better.  But I got what I could.  Catchphrases make good wrestlers and the Rock had like, seven.  So watch some of these videos and see that even then you could tell that he was destined for bigger and better things.  Screw you, Hulk Hogan.

And if you think wrestling is fake, derh.  Of course it is.  But so are movies, unless you think that there are really slums in India.  Naive bastard.

This clip would encapsulate everything about a good Rock promo if it had the sign off.  But meh.  Stupid Youtube.

More after the jump:

The Sign-off that should have been in the previous clip

I had like, fifteen more, but I get tired of embedding.  Embedding is hard.