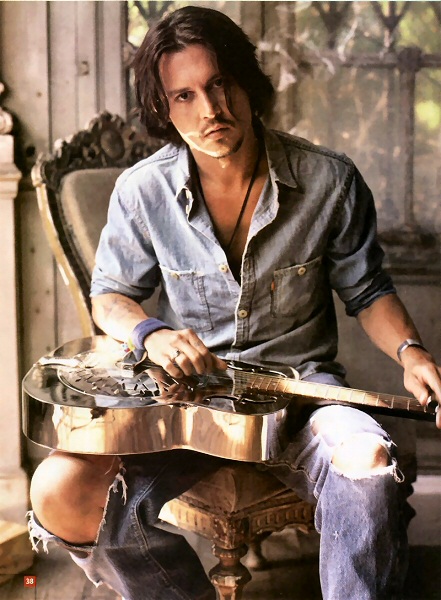 Johnny Depp was awarded Sexiest Man Alive for the second time by People magazine.  If I were in charge, he would have been named that every year for the last…twenty?  And for the next twenty, natch.  I predict he,  Robert Downey, Jr. and Leonardo DiCaprio will be remembered as this generation’s greatest actors.  Of that group of impressive thespians (they really do become the character!), only dear darling Johnny is beautiful, strong, delicate, weird and brilliant.  Not many guys can wear eyeliner and facial hair* and still come off manly as hell.  His conversational range, his grasp of topics and his insight and comprehension leave me breathless.  He hangs out with people who can keep up with him (Hunter S. Thompson for one shining example) and doesn’t give the rest of the Hollywood crap a second thought.  His priorities are so solidly in the proper place.

Gaze upon the many faces of Senor Depp

One of the funniest things I ever saw on Letterman was Depp explaining what it is like to spend time with his then-two-year-old.  Basically, he said it was like hanging out with a tiny little drunk.  Toddlers fall down randomly, laugh and cry for no reason, wet themselves and blurt out bizarre shit.

I’m not much of a movie lover but I see everything this man does.   Once Upon a Time in Mexico was pretty underrated.   The eye gouging thing still fucking haunts me, at the end when Eva Mendes kisses him and he tricks her with a fake arm and shoots her while the blood is dripping down his face behind his sunglasses.  I think this may be the only Antonio Banderas movie I’ve ever seen.  But that twirling to avoid the bullet and shooting the dude’s kneecaps from behind his back is really very awesome.  Ruben Blades is pretty hot, too, come to think of it.  Oh fuck it, just watch the last eight minutes or so for yourself.

Sometimes, youtube is incredible.  There’s another vid after the jump for the true fans.  I mean…whoa.

*I realize facial hair is, by definition, manly.  I don’t care for it in general and the sentence just worked and I’m sick and oh deal with it!