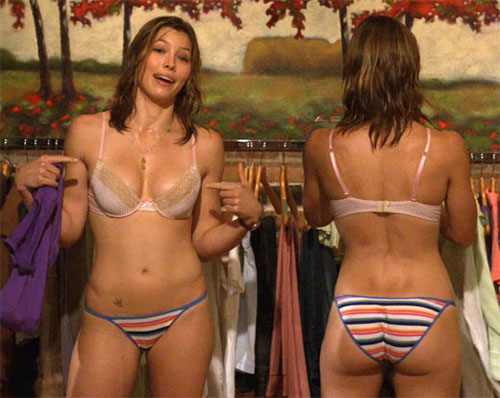 I have come from another planet to make women feel badly about themselves.

According to Jessica Biel, her hotness is hurting her movie career.  She told Us Magazine:

The actress — whose latest film, Powder Blue, (in which she plays a stripper) is going to straight to DVD — isn’t handed plum roles.
“I’m in there with everybody else, fighting for the good parts. Yes, The Illusionist has made a difference — but a huge, massive difference, so I can pick and choose what I want? No.”
Biel, 27, covets the careers of Scarlett Johansson and Natalie Portman.

Jessica Jessica Jessica.  It has NOTHING to do with your face.  It is your body.  You look like what the guys who write comic books draw as women.  Your ass has more muscles than Scarlett Johansson’s whole body.  You could use it to break Natalie Portman in half like those Japanese chicks break chopsticks and forks.  Face to face, Scarjo and… Natpo are hotter than you.  But body wise, they would not come close to you unless they somehow got caught in the same teleporter like Jeff Goldblum in The Fly.

Nobody is going to give you some serious acting role for the same reason nobody gives them to Wesley Snipes or The Rock or Chyna.  Nobody would believe it.  EVen that Illusionist movie was a stretch.  I saw it and even though you were made up in those old timey gowns you could still see how ripped you were.  People in olden times didn’t look like that unless they were a blacksmith or rowed a ship.

To recap – you are not prettier than those other women.  You ARE pretty – but not prettier than them.  The reason you don’t get serious acting roles is because every move you make accentuates the fact that you are a built like an Olympian.  Chicks can see Scarlett and say: she’s a little flabby.  Then see Natalie and say: she’s too skinny.  But when they look at you, all they can do is look at their man and seethe.  So your only chance is to be in movies that chicks don’t want to see.  The only other thing I can think of is for you stick your tongue out at every audition.  Holy shit, I don’t even think you are real.

After the Jump!  Think I was lying about the chicks breaking things with their asses?  Well I wasn’t and I have the video to prove it!