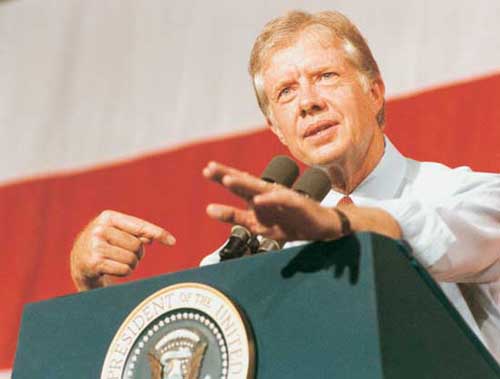 I dispute these allegations whilst pointing at my own junk.

I cannot verify anything in the below but I think it would be really really fucking funny if the little mild mannered peanut dude was the raging dick this guy says he was.  It sort of makes you wonder if he talks about the plight of the poor Palestinian children and then, when they turn the cameras off, he kicks their little asses and spits on their moms.

Jimmy Carter was the “least likeable” president, Ronald Kessler reveals in his new book about the Secret Service that chronicles the agency’s activities guarding every president from Kennedy to Obama…

I am gonna put the whole thing after the jump, or just link to it, but this made me LOL.

At his home in Plains, Ga., Carter once tried to attack and kill a small dog with a bow saw. Agents had befriended the stray dog, a terrier, and given it the code name Dolphin.

When the dog ate some food Carter’s wife, Rosalynn, had put out for their Siamese cat, Carter “got the bow saw off a woodpile near the family room patio” and “tried to kill the dog,” one agent who was there told Kessler.

More after the jump.

“For three and a half years, agent John Piasecky was on Carter’s detail — including seven months of driving him in the presidential limousine — and Carter never spoke to him, he says.
“At the same time, Carter tried to project an image of himself as man of the people by carrying his own luggage when traveling. But that was often for show. When he was a candidate in 1976, Carter would carry his own bags when the press was around but ask the Secret Service to carry them the rest of the time.”

On one occasion, disgruntled agents deliberately left Carter’s luggage in the trunk of his car at an airport, and Carter “was without clothes for two days.”

At his home in Plains, Ga., Carter once tried to attack and kill a small dog with a bow saw. Agents had befriended the stray dog, a terrier, and given it the code name Dolphin.

When the dog ate some food Carter’s wife, Rosalynn, had put out for their Siamese cat, Carter “got the bow saw off a woodpile near the family room patio” and “tried to kill the dog,” one agent who was there told Kessler.

Dolphin dodged the attack, but Carter insisted that agents remove the dog from Plains. The orphan dog was given to the press corps.

As president, Carter needed to have the “nuclear football” at hand to enable him to take action in case of a nuclear attack.

But the president — code-named Deacon — refused to allow a military aide with the nuclear football to stay in a trailer on his property in Plains. The aide had to stay in Americus, a 15-minute drive from Carter’s home, a top military official confirmed to Kessler.

“Because of the agreed-upon protocols, in the event of a nuclear attack, Carter could not have launched a counterattack by calling the aide in Americus,” Kessler writes. “By the time the military aide drove to Carter’s home, the United States would have been within five minutes of being wiped out by nuclear-tipped missiles.”

Carter was “moody and mistrustful” and sought to micromanage everything, agents told Kessler. He insisted that aides ask him for permission to use the White House tennis courts — even when he was traveling on Air Force One.

Early in his presidency, Carter proclaimed that the White House would be “dry,” and only wine, but no liquor, would be served at state dinners.

The word was passed to get rid of all the booze on Air Force One, at Camp David, and in the White House. But on the first Sunday the Carters were in the White House, they ordered up Bloody Marys before going to church.

Kessler discloses that Carter “would regularly make a show of going to the Oval Office at 5 a.m. or 6 a.m. to call attention to how hard he was working for the American people.”

In fact, “he would work for half an hour, then close the curtains and take a nap,” Robert B. Sulliman Jr., who was on Carter’s detail, told Kessler.

“His staff would tell the press he was working.”

As the Carter administration drew to a close, Carter and his staff became more paranoid. They believed that people were stealing things and eavesdropping on his conversations in the Oval Office.

Before going on a fishing trip in Georgia one morning, Carter accused a Secret Service agent of stealing fried chicken stewards had prepared. In fact, White House aides Jody Powell and Hamilton Jordan had eaten the chicken.

He reveals that Carter told the Secret Service that Rosalynn objected to agents and uniformed officers being armed inside the White House. Rosalynn said guns made the Carters’ daughter, Amy, “uncomfortable.” Agents explained that in the event of an attack, they would be useless if they were not armed. The president relented.

After leaving the White House, Carter made a show that he was going to save the taxpayers’ money by not keeping the Secret Service. But he soon brought agents back when he discovered that having federal agents along got him express service at airports and the like.

GSA managers found that when Carter stayed at the townhouse, he would take down the photos of Republican presidents Ford and Nixon and put up a half-dozen large photos of himself.

“He didn’t like them [Ford and Nixon] looking down at him,” GSA manager Lucille Price told Kessler.