John Mayer is a Douche 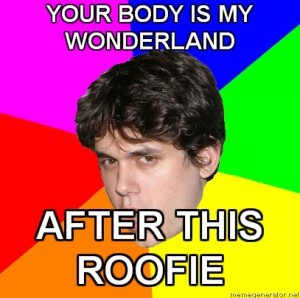 John Mayer is a douche.  I’ve been mad at him ever since the Crossroads Guitar Festival.  He was invited to play with some of the greatest guitarists alive.  A very small portion of that audience listens to Top 40 crap so they may have not even known who he was.  So here’s this kid with this amazing opportunity and he played his crapfest Waiting for the World to Change.  Bill Murray (the MC) even hollered at him, “We want music, boy!”  He totally misread the venue or took the safe route or something.  And this kid can play.  He is an astoundingly gifted guitarist.  As a human, though, he is pure shit.

To make this an upbeat, happy Friday sort of article, let’s review what the legendary B.B. King* said about Eric Clapton that wonderful day:

Prior to performing “The Thrill is Gone” King raised a cup of water and praised Eric Clapton, who was standing in the wings. Full of emotion and genuine sincerity, he said,

“Here’s a toast to the boss. . . I’ve been to more than 90 countries. I’ve met kings and queens, but I’ve never met a more gracious man, than my friend Eric Clapton. And I say to all of you, may I live forever, but may you live forever and a day. When they lay me out to rest, may the last voices I hear be yours.”