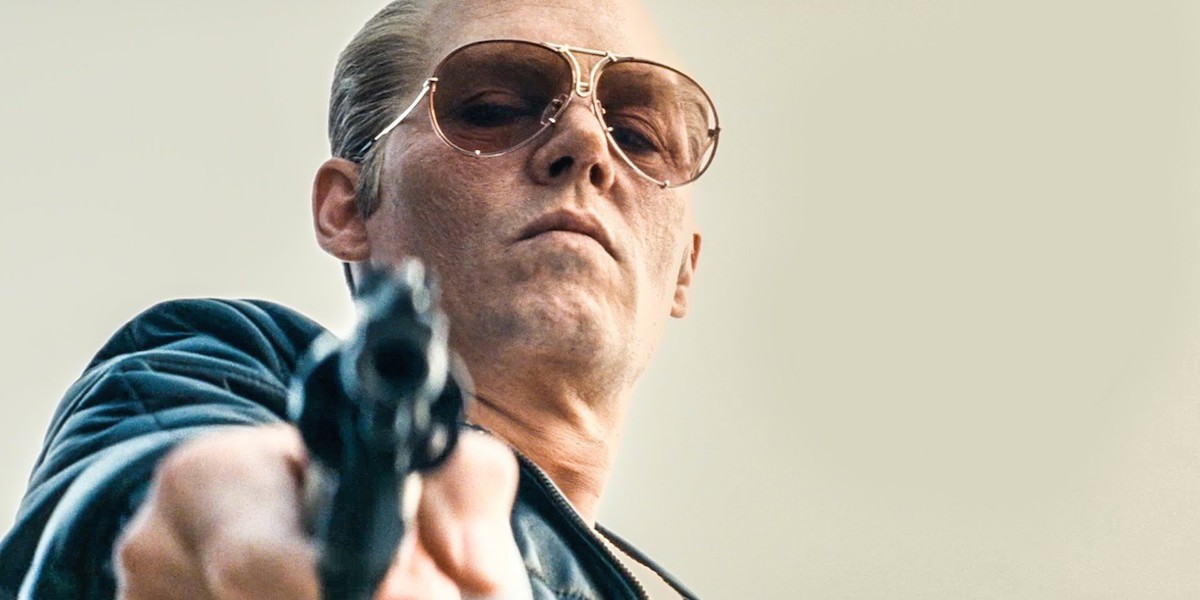 This post is written by guest author Roger Sherman. Roger likes to yell at people on G+, ride bike, and does something with computers. Luckily he yells at the same people I like to yell at so he fits right in with the staff here. Visit Holy S#$%, it’s Rog! to find out more.

Warning, this contains some mild spoilers. 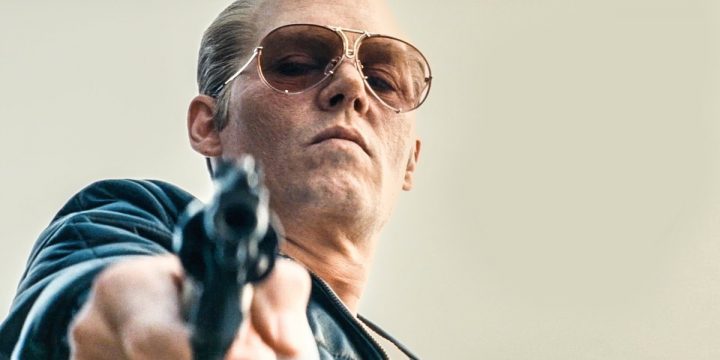 This was not a very entertaining movie.

Maybe I ask for too much, like, I don’t know. Character development, relationships being properly established, more than one facial expression out of the lead actor…

Since it’s based on real people, and I knew how it all ended, at one point I considered leaving. Had that idea occurred to me with more than 20 minutes to go, I probably would have. But then you wouldn’t be reading this review, and what a tragedy that would be. 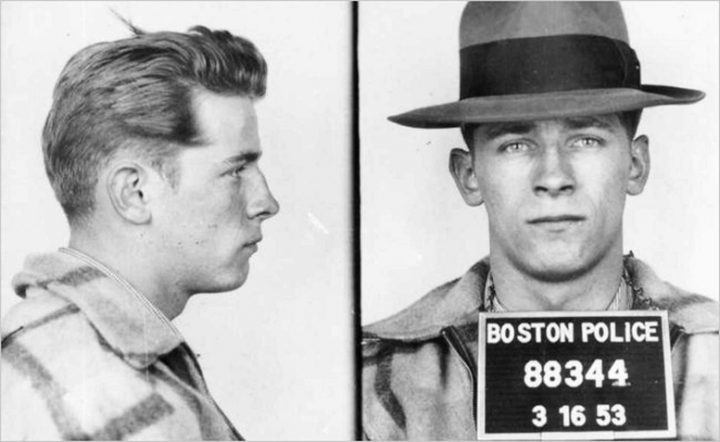 Jimmy Bulger was a bad guy. A bad, bad guy. Even for a psycho Southie Irish mobster, he was terrifying…the least slight could and would get you killed. All of the bad guys that hung out with him seemed to be unhappy that they had to deal with such a bad guy. Which says something, because they were all horrific, murderous pieces of garbage. Depp seemed sure that this idea was difficult to get across, so he made sure to really hammer the idea home with a relentless scowl that – literally – never left his face. 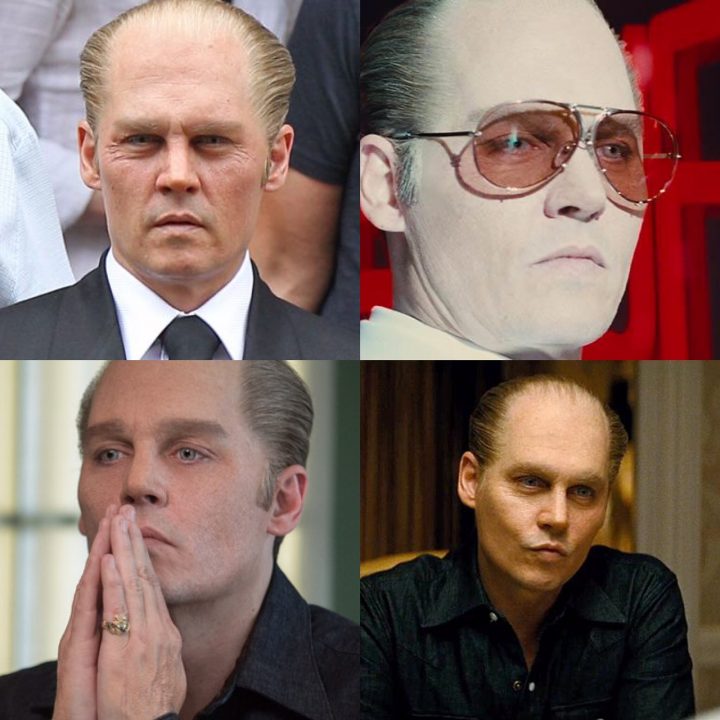 The real life character, the writing, that evidently didn’t do it – even when Bulger was murdering a friends (probably the wrong word) daughter, and then making the friend clean up the mess. Fortunately, there’s that scowl. And he never tired of showing he was the alpha male, whether it was threatening cops on the street, running his hands all over Julianne Nicholson (in one of the creepiest scenes of the year), or menacing every FBI agent he came across, at one point or another. The only time he wasn’t “on”, the only points at which he wasn’t focused on the business of being scary, was when he was either saying hi to an old lady that…maybe he knew? Or when he was playing gin with his mother. Narration dictated that Bulger grew less and less happy when a couple of important people in his life died, but you’d never know from Depp’s performance.

To me, the fascinating part of this whole adventure was the FBI – it’s fairly well known that they rubber stamped everything Bulger did in exchange for an “alliance” in which Bulger gave them information that shook the Mafia to its core. Except…according to this movie (this is the spoiler-ish part), he really only gives the Fibbies one bit of information. Now, it does lead to a wire tap bust of several Mafia higher ups (regional higher ups, not Jersey folk), but evidently the entirety of the rest of the information that had supposedly come from Bulger, came from FBI Agent Connolly, and his well meaning sidekick who was seduced by the dark side, John Morris (played by the mildly sympathetic David Harbour). 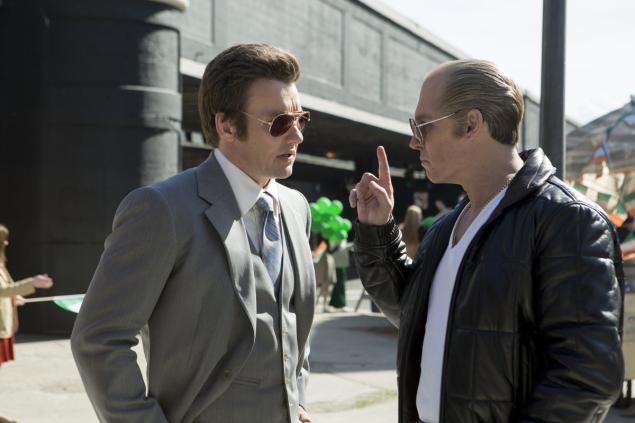 So, according to this movie, John Connolly (played in a single note by Joel Edgerton), the FBI handler and childhood acquaintance of James ‘Whitey’ Bulger (played by Johnny Depp, in similarly nuanced fashion – did they botox his face into place before filming?), literally never did anything in the FBI, other than help Bulger become a Southie kingpin and…jai alai backer? They never even made an attempt to really explain what was going on with the jai alai thing. One moment, they’re in Boston, the next – they’re in Miami, and somehow getting money out of jai alai, though how was never really explained (they suggested corruption, but…). Yet he gets promotion after promotion, and alienates his wife. This apparently happens over a period of years, but the relationship between the Fed and his wife very abruptly went from…something vaguely established (established is really too strong a word) as marital bliss to
“You’re wearing a nice suit – you’re one of them!”
“I’m a street kid, baby! Like it or not!”
to
“How can you let these people in the house?!?”
to the wife changing the locks.

That’s how they went about showing the end of Connolly’s marriage, by him being locked out, in the pouring rain (of course), yelling up at her window, and her light turning out. Poor Julianne Nicholson, who played the long(?) suffering Marianne Connolly, didn’t even get a final scene to dump the idiot.

Btw – ladies? If you’re looking for strong female characters, or a movie that passes the Bechdel test, this isn’t it. But don’t worry, it also completely wasted Kevin Bacon (and didn’t even let him show his dick). His role was limited to that of essentially the angry sergeant stereotype, always angry, always yelling. And not without reason – it was pretty clear he understood the implications of letting a childhood friend of Bulgers being Bulgers handler, but didn’t have the balls or authority to “pull the plug” as he constantly threatened to do.

While not as bad as, say, American Sniper, in terms of terrible storytelling (that’s not a political statement, it was a horrible movie), it really never established anything other than Jimmy Bulger doesn’t like to be called Whitey, and that the FBI is pretty easily duped by morons. The only nod to time passing was the year being occasionally shown; outside of that, the last scene could have taken a day after the first scene. Also, in this film, Bulger had a son (I don’t know if this was based on fact, or not). The mother, Lindsey Cyr, played by Dakota Johnson, may have had a relationship with Bulger. The film wastes not one single second in letting us know if that’s true.

The acting wasn’t great. I honestly (for some reason) expected better out of Depp. The female actors…they simply had nothing to work with. Benedict Cumberbatch was in this movie…he changed his accent, but brought along all the British mannerisms that all his other characters have had. John Morris actually seemed to have a bit of a transformation through this movie, at one point being clearly uncomfortable with the idea of turning a wanna be informant on Bulger out into the street, rather than risk giving up the boon to his career that he thought Bulger would be.