Just When You Thought You Were Done Mourning 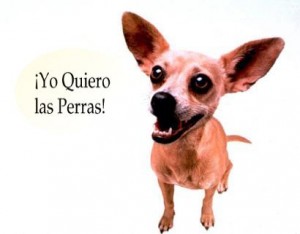 LOS ANGELES — Gidget the Chihuahua, the bug-eyed, big-eared star of 1990s Taco Bell commercials who was a diva on and off the screen, has died. She was 15.

Gidget suffered a massive stroke late Tuesday night at her trainer’s home in Santa Clarita and had to be euthanized, said Karin McElhatton, owner of Studio Animal Services in Castaic, which owned the dog.

Pretty sure any stroke for a dog that damn small would be considered massive. Can’t really put this tragedy into words, but if you can put it into equations the level of this death has a reach that looks something like this:

Can’t deduce that action? One, go back to school. Two, let’s just say it is impactful.