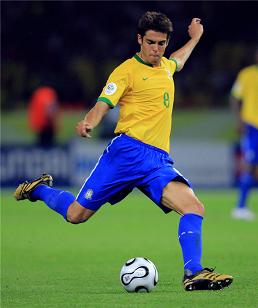 International soccer star Kaka, a native of Brazil, has signed a six-year contract with Real Madrid of Spain.

Although details of the transfer aren’t official, reports are that Real Madrid may have paid more than $94 million to purchase the rights to the players from Italy’s AC Milan.

This is how they do it over in Europe. Just straight up selling fools. This would be the most that a player has been sold for over there. Fortunately for the purchasing team, Kaka! is one of the best players in the world. Maybe not Cristiano Ronaldo good, but then again, maybe that good.

I will say this, however, watching Kaka! is more captivating than watching anyone else in the world.