We're not in Kansas anymore.

Are you the type to ride the house or the bicycle?

“Route 95 is lightning alley and there’s Tornado warnings for where I have to drive through to get home.”

That was my cousin driving home through Southern New Hampshire.

Tornados are supposed to stick to Kansas. You know, In Twister Bill Paxton and Helen Hunt save their marriage by rushing toward monster storms instead of away from them. That movie has generated a whole horde of tornado fans that descend on the area during storm season. “Outrageously Stupid” is what Kansas officials call the traffic jams of amateur storm watchers.

None of the “outrageously stupid” were running around New Hampshire July 3rd because those monster storms are supposed to be off in Kansas and Nebraska. It was only people I’m fond of running into the storm going, “Oh shit” and posting it on FaceBook.

One of the new things social media has brought us is that you can experience disasters live. It was bad enough with all those last phone calls on 9/11 can you imagine how bad it would have been with people posting selfies from the towers? Lately it’s separatists fighting in Ukrainian neighborhoods that look a lot like our own. That and tornadoes in Southern New Hampshire where nobody knows what to do about them. 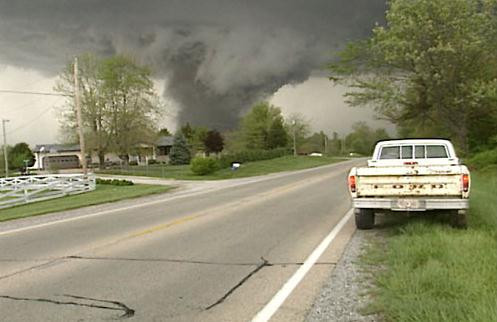 The last time I was in Kansas the natives started squealing tires out of the parking lot of the McDonald’s where I was having lunch. They knew what the clouds on the horizon meant even before the emergency broadcast network scared the hell out of me. On the ground it is hard to figure out where a twister is touching down. This is especially true when beat up old pickups are passing at about a hundred miles an hour while you’re trying to figure out where Buttermilk Junction is on a map. Only after I found a motel with brick walls did I discover that the twisters had been chasing me down the highway eating trailer parks.

You’re not supposed to be that close. Anything less than half a mile puts you into the outrageously stupid category. It’s not just the two by fours driven by 150 mph winds. Those baseball sized hail stones can kill you just as easily. You can get struck by lightning too. Ordinarily it’s a 1 in 700,000 chance of being hit but you’ve got to admit the odds are a lot better when they’re banging all around you like gods own light show.

Real storm watchers have made it so at the minimum there is at least a fourteen minute warning of a deadly storm. Get a portable radio that connects to NOAA. The link shows the one I have which also has a flashlight and a cell phone charger. Know where it’s safe in your house. That’s the lowest level or an inner hallway. Windows are potential Claymore mines of shattered glass so stay away from them. Dragging a mattress out to cover yourself is one of the worst things you can do. People have suffocated in collapsed houses that way. Put your pets on their leash or in a carrier. If you’re not at home stay in the car WITH THE SEATBELT BUCKLED. If you can’t flee the storm get off the road when flying debris makes driving unsafe.

Above all get back online when it’s over and tell the rest of us you’re safe. We can stop worrying and make jokes about whether you should have been riding a broom or a house on the way to OZ.