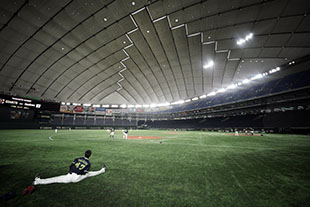 The COVID 19 pandemic has had a crippling effect on business the world over. But, the hardest hit is the Tourism, Aviation, Entertainment and the Sports Industry.  Here there is no scope of clicking away on the laptop sitting in the comfort of one’s home.

Today it is more than 100 days since no games have been played in the US due to the lockdown. Although the clubs and sports associations are contemplating starting the playing season, the question is whether there would be fans watching the game. The empty seats in the stadium would mean loss of revenue. The Kansas City has thousands of fans to watch these sports games.

The opening day of Major Leagues Baseball in Kansas City was postponed and the new date is nowhere in sight. Initially it was expected that stay-at-home would last till the end of April, but even today the picture is not much different. CDC’s recommendation at the end of March stated that the organizers should postpone or cancel events with 50 or more people. The MLB and Major Leagues Baseball Players Association (MLBPA) had been discussing how to handle the situation. Plans are being discussed to allow players, who have undergone COVID-19 tests and are not found positive to play the game in their home ground. However, it was also suggested that the games would be played without fans.

The issue of resumption of the games is also hitting roadblocks, as the parties concerned are unable to come to a mutually amicable decision regarding sharing of revenues. In March, an agreement was reached that the players would be paid their full salary only if the game is played in front of the fans. In case the situation did not change there would be a separate agreement. As per a statement issued by the MLB a few days ago, that although they had made three proposals for resumption of play, which would resolve the issue and will benefit players, clubs and the fans, MLBPA is not ready to negotiate. However, MLBPA took up a position that even if the games resumed without any fans, the entire revenue generated during the 2020 season would have to be paid to the players.  MLB has stated that they will reconsider the union’s terms and then decide when and how to open the games.

As reported in the Kansas City Business Journal, MLB has informed recently that some major league players and coaches have tested COVID 19 positive and has expressed concerns regarding starting the season although an agreement with unions may be in sight. MLB has informed that they want to finish off the season by September 27, as there is a fear that a second wave of the virus could affect the game’s postseason.  However, the Association wants to play as many games as possible during the season, but MLB considers this unsafe and unviable. In view of the anticipated surge in the virus spread.

It is not known when the games will actually be played, but even if it is played the stands will remain empty. This translates to a huge loss in secondary ticketing market

TicketIQ, the online ticketing portal, has come up with a calculation showing the loss in revenue for the MLB teams during the 2020 season.  As per their estimate, losing 40 home games, the 30 teams stand to lose $2.5 billion in ticket sales only.  Losing 40 home games would mean a loss of $52.61 million for the Kansas City Royals.

The combined effect on the other sporting activities shows the severity of the impact. ESPN Sports has reported that if the games are resumed and played without fans there could be a loss of revenue to the tune of $3 billion, which means $100 million per team. The estimated revenue loss during 2020 as projected by TicketIQ for all sports leagues combined is more than $17 billion, including NCAA Tournament and college football.

The loss estimates are calculated by multiplying the total number of seats in a stadium with the average value of a secondary market ticket and the number of games played. However, this estimate is rather on the higher side.

TicketIQ has further given a break up of how different games could suffer loss due to games without fans. It shows that NFL games could lose $4.7 billion, MLB could lose $5 billion, NBA’s losses could amount to more than $1.6 billion, the projected losses for NHL may cross $1.1 billion and there could be a loss of $640 million to Major League Soccer.

TicketIQ has also projected a total loss of $397,733,161 on loss in ticket sales in the secondary market in Kansas City if the fans stay away from the games.  The break up is as follows:

As per TicketIQ’s baseball blog, 28 games of Kansas City Royals alone were postponed during May averaging an attendance of 18,267. The resulting loss in the secondary ticketing market was estimated to be $36,826,272 (average ticket cost $72).

The figures are quite significant and it is certain to have a longstanding effect on sporting activities.  The owners of some of the teams have engaged the players in providing community service. The new owner of Royals has launched Royal Respond which also funds non-profit organizations in the Kansas City area to provide assistance to those affected by the corona virus crisis.

The management states that although playing games is the team’s main objective, at this time of crisis working for the greater good of the community is one of their priorities.