Kimbo Slice headed to the UFC 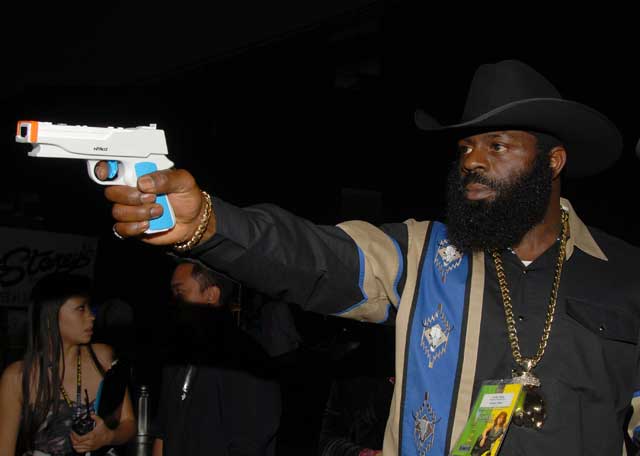 Kimbo knows this gun is not real. You should also know Kimbo would kill you with it somehow.

In their first exclusive not having to do with Reggie Bush or the USC Trojans Football Program, Yahoo announced that Kimbo Slice would be on the next season of UFCs Ultimate Fighter. Ultimate Fighter is the reality show where, blah blah blah, dudes fight. Kimbo holds the distinction in fighting in the most watched MMA match with the now gone EliteXC company that held primetime shows on CBS.

The UFC President apparently thinks this dude is awful and the UFC President is known for calling people names and trying to stir up controversy. So, hopefully the same will happen with Kimbo, because that could certainly get interesting.


Dana White, the UFC President, has ripped Kimbo in the past and also ripped the promotion that Slice was fighting for on CBS. Here are some quotes…

“Kimbo Slice sucks, like I’ve said now for the last few months. This [expletive] guy can’t fight and he got knocked out in 13 seconds by a guy who didn’t win The Ultimate Fighter.”

“What has the guy done to deserve to be in the UFC? Nothing. I don’t consider him a real athlete or anything. He won’t win The Ultimate Fighter. The offer is out there if he wants to take it and he won’t win it. I might [put a heavyweight show together just for him].”

Well, White has put that heavyweight show together just for him. I’ll be rooting for Kimbo since traditional MMA fans dislike the guy, but fuck it, he is still badass and just needs that fine tuning that every MMA fighter gets.