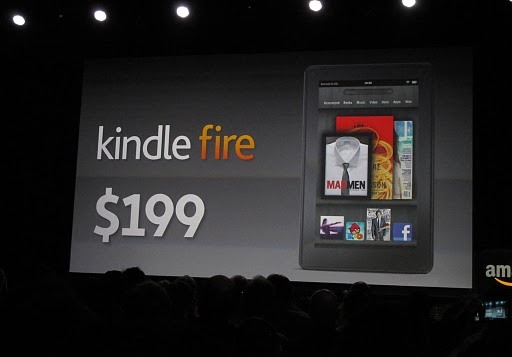 You know how in Prison they hollow out bibles for space to hide their shivs? If you were to hollow out a “Tablet for Dummies” book, the Kindle Fire would be the device you would store inside of it. Look, a shiv is not the best possible weapon you’re going to find, but, when you need to take a guy out in a cafeteria line, it’ll make due. That’s the Kindle Fire in a nutshell.

A good device, but, if you know your way around Tablets, or Android smartphones, will probably find it a bit limited. The first thing that I considered a roadblock was that you couldn’t change the background image on the lock screen. Which isn’t that major of a deal, but, when you’re used to changing an Android background quite often, it’s a stumble. And, on that note, not having

But, for the majority of people who will buy and use the product, the Kindle Fire is going to wind up in the range of pretty damn spectacular. Because, once you’re inside the device, things work normally like an Android.

The biggest feature missing from Amazon’s Kindle Fire is that when the tablet boots up, it doesn’t have the voice of the video game NBA Jam opening by saying, “He’s on Fire!”

The Kindle Fire is definitely a device that Amazon is going to use to promote their Amazon Prime streaming video and movies, and maybe books, but, it seems like a solid value. Speaking of books, in messing around with the Fire, I barely read any. I’m sure it can do that rather well, but, hell, you know that going in.

The Fire is very easy to use, and seems like a device streamlined to make ease of use a priority. Finding your way around the device is a breeze and the load times seem solid.

Maybe it’s not the device that someone that has used Android phones would want to step up to. Because that person is likely going to feel the limitations of the Fire the most. But, most users won’t feel those limitations. It’s not a competing device with the IPad, but, it’s a tablet that knows its role and performs it very well.