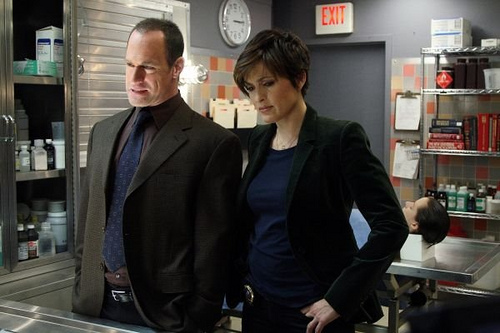 Stabler: Yep. I farted. Benson: Yep. You did.

Tonight is the season finale of Law and Order SVU.  And I know you bastards watch it at some point.  Even if you don’t watch the first runs, you start watching it when you see it on USA.  I spent a whole weekend watching the damn show on Netflix because apparently I am addicted to the concept of sex slaves.  As you know, one out of every four episodes of the show involve some type of sex slavin’.  I don’t see how people dare to go to the store in NYC.  From the way this show tells it, you head out for some Snapple and BAM!  Sex Slave.

But, I did want to point out some things that make the show cool.  And if you don’t watch it now (both of you) you can just leave your TV on for a couple hours and it will show up.  Even if you are watching a channel that doesn’t exist, like J or Apple Pie.