Leap Into the Wild Blue Yonder with Amazon’s The Tick 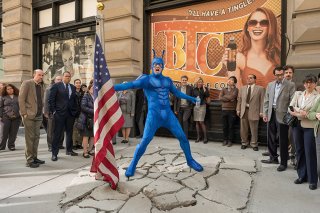 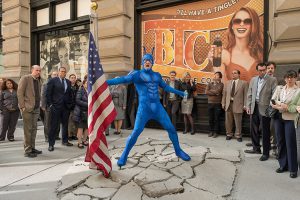 I’m not a huge superhero fan. In fact, thanks to Marvel and DC and the conglomerates that own them, I’ve been experiencing a superhero burnout. It’s a rich vein of story and character and imagination being sanitized and sucked dry to turn a huge profit and it’s lost a lot of appeal to me. That said, there is one (underrated) hero who I will never tire of. A looming, larger than life, almost naively innocent character known simply as The Tick.

Like most of my generation, I was introduced to The Tick thanks to Saturday morning cartoons in the 90’s and soon found myself reading the comics as well. Something about the nigh invulnerable hero and his neurotic sidekick spoke to me. Combine that with the off the wall storytelling, fantastic characters, and a combination of thought provoking and completely random, irreverent narrative and I was hooked.  A very short lived live action version of the super duo appeared on Fox in 2001 but only last for a few episodes before being canceled and, when it was announced that Amazon was attempting a live action reboot of the franchise I was skeptical.

Peter Serafinowicz as the titular Tick seemed a strange choice to me. The British actor is no stranger to genre work, most notably his performance in the cult zombie classic Shaun of the Dead, but to see him portray this naively innocent, altruistic super seemed almost unfathomable. Yet, which each episode since the pilot it’s become harder to think of anyone doing a better job short of ripping the character right from the page and animating him to save the world. Added to an ensemble cast of familiar characters and new additions and helmed by Tick creator Ben Edlund, this series has already shown a lot of promise. 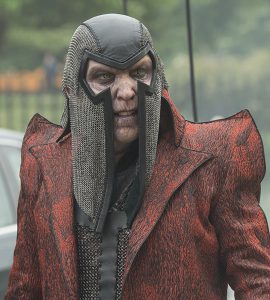 But unlike some comic book adaptations that choose to hold characters rigidly to the confines of their two-dimensional universe or to go wildly off script and redefine the character, The Tick has promised to remain true to the subject matter while evolving the idea behind the characters to make them less like satirical tropes and more realized characters with developed back stories and motivations where needed. Arthur isn’t just a neurotic accountant yearning to break free of the shackles of his banal existence. There’s a trauma to him now, a character trait hindering him to be overcome and risen above. In many ways, Amazon’s The Tick is more about the sidekick than the hero. Then there’s Arthur’s sister, Dot. No longer just an overbearing, overprotective, meddling mother figure, she shows the other side of childhood trauma. Suffering the same loss of her father that Arthur suffered, she becomes a paramedic and, eventually, an informant for the superhero alliance brewing in the series. 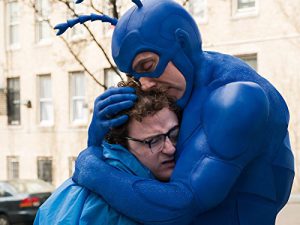 Meanwhile, Jackie Earle Haley as The Terror, the aged, completely off the wall insane villain of all villains brings a beautiful, malevolent, dark streak of comedy and classic antagonism to the screen not seen since the forces of the Decepticons and COBRA ruled the airwaves on Saturday mornings in the 80’s. There’s a touch of the modern villain, that very philosophic and sophisticated bad guy with a cold, calculating murderous slant wrapped up in the bat crap crazy, over the top cartoonishness that brings a measure of humor and levity to the character. He’s a character that you sort of have to love while you hate and fear him.

The Tick has proven to be a wildly successful new addition for Amazon’s Prime streaming video service with longtime fans and new devotees coming together to enjoy a refreshingly unique take on a genre that has, thanks to Marvel and DC, become increasingly stale and overused. The series has already been renewed for a second season and, personally, I can’t wait to see my favorite heroes continue to defend The City from the forces of The Terror and the truly bizarre rogues gallery of Ben Edlund’s genius comic. Leap into the wild blue yonder with Amazon’s The Tick and see for yourself.