At Least the Whales Aren't Petunias 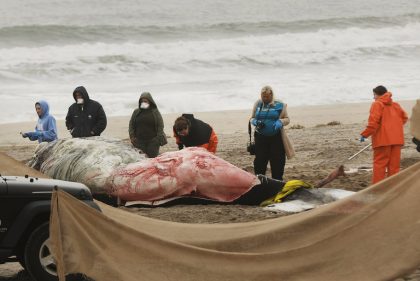 The Whales Are Dying

Don’t panic, people.  There’s no need to grab your towels and try to make your way off planet because the Earth is about to be destroyed by a Vogon fleet to make way for a hyperspace bypass.  The dead whale you see in the picture above did not fall from the sky!

Apparently, there’s a mass die-off of Humpback whales happening in the Atlantic ocean right, freaking, now.  And no one knows why!  There’s always some smartass who has an idea or “suggestion,” but at the end of the day these deaths are mysterious and troubling.

According to the New York Times:

Scientists have suggested that some whale deaths could be a result of marine noise, often a result of military activity, offshore drilling or exploration, which can disorient the animals and send them in the wrong direction, possibly toward beaches where they get stuck instead of into the deeper ocean.

I know I said not to panic, but maybe we should.  Just a little.  We have bleached reefs, overfished oceans, and now mass die-offs of our fellow mammals.I’m not a betting man, but if I were I’d bet dollars to donuts that Mother Nature had had it about up to here with us Humans, competing with her deadly storms and volcanoes and meteors with our own destructiveness.  Our greed, quest for power, money, and fame is really ticking Her off.  It’s just possible that Douglas Adams had it right in the Hitchhiker’s Guide to the Galaxy….

This planet has—or rather had—a problem, which was this: most of the people living on it were unhappy for pretty much all of the time. Many solutions were suggested for this problem, but most of these were largely concerned with the movement of small green pieces of paper, which was odd because on the whole it wasn’t the small green pieces of paper that were unhappy.

Grab your towels, folks.  I see a three-headed ex-President of the Galaxy and I’m think we should get off the planet before we’re royally screwed.

“And the rest, after a sudden wet thud, was silence….”