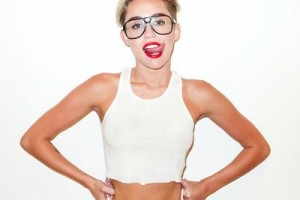 First of all, just because Miley Cyrus hangs her tongue out like she uses it to breathe doesn’t mean that every other site on the damned Internet can start pretending they are about Celebrity Tongues.  That’s our thing.  So just walk away.

Secondly, I don’t remember who I was telling (I should really restrict myself to writing on here, as all my smart observations and best jokes get wasted on Google Chat) but I knew Daft Punk would be a huge bust at the VMAs.  They just stood there.  And how does anyone know it was even them?  They are wearing helmets, ffs.  I could tell you that Daft Punk swept my driveway (and supply pics) and you would not be able to dispute it.  So I guess now I have decided that I’m a Daft Punk birther.

I think that was really, really disturbing. That young lady who is 20, is obviously deeply troubled, deeply disturbed, clearly has confidence issues, probably eating disorder and I don’t think anybody should have put her on stage. That was disgusting and embarrassing…That was not attractive. That was not fun. That was not funny. That was really, really bad for anybody who’s younger and impressionable and she’s really messed up…The whole thing was cringe worthy but I feel bad for her. She is a mess. Someone needs to take care of her. Someone needs not to put her on stage and make a complete fool of herself.”

Ms. Brzezinski, I have watched your show for a REALLY long time.  Not sure why.  I just do.  And while sometimes I get really mad and yell at your show’s inconsistencies and overall stupidness from the shower, sometimes I am truly stunned and have to rewind it.  This was one of those times.  You think she is “troubled” and “disturbed”?  That seems a little harsh, no?  I mean, I know she isn’t a side-kick to the lone conservative on a liberal network who really wants to be the “other side” of the discussion but ends up being a lifeless shill that Alan Colmes would shake his head at.  Someone who let Joe Scarborough, the host of the show, get away with complaining that Hollywood never makes any “conservative” movies.  What?  There are at least 5 jokes that you could have used INSTANTLY instead of nodding your head like a dummy.

What does all this have to do with  Miley Cyrus?  Well, a sanctimonious grown woman decided to call a 20 year old kid a “mess” and say that “someone needs to take care of her.”  Why?  Because she did her job?  Once I was watching Mika and she said the word “sycophant” on the air.  She pronounced it sigh-CO-fent.  I’m not kidding.  Her job is to read teleprompters and she IS a sycophant, and she didn’t even know how to pronounce it.  At least Miley did her thing correctly.  And it isn’t like we all didn’t know this was coming.  Watch the video below.  She knew she was gonna be OK.  And I guess she finally got the memo about the stilettos.