Lebron Not to New York? And More Lebron Lameness 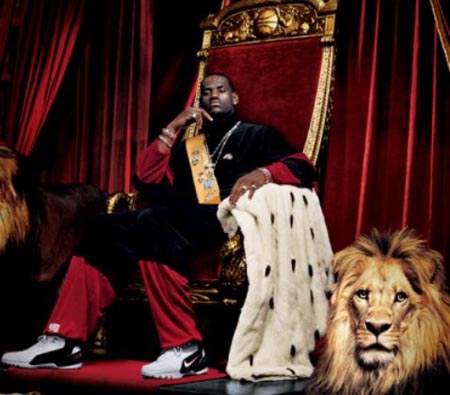 A King needs a throne. And lions. Shit, where's that scepter?

Two NBA stories were all over the place yesterday.

1. Lebron James got dunked on by some college kid at Lebron’s summer hoops camp. The King was embarrassed enough by this that he decided to say, fuck it, let me grab those video tapes, yo? Seriously. He confiscated the videotapes of a couple guys who filmed the two hand slam. How much more petty can you be?

2. Here’s a story that is even more important. The NBA Salary Cap may reduce for next season. What does that mean? Well, all those hot stories of Dwayne Wade and Lebron James meeting up in New York to win hell of titles is cold out the window.

This is somewhat depressing, as it means that next summer will be fairly boring and most of the star players will re-sign with their current teams. Amare would grin and bear it and kick back in with the Suns. Chris Bosh might even stay in Toronto. And, more specifically, Lebron would likely stay in Cleveland. Because, the thing is, if he was leaving, he wasn’t going to a team like the Knicks alone. So, hopefully the economy kicks back up just for our summer NBA entertainment next year.