Let Me Tell You Something, Camille Paglia 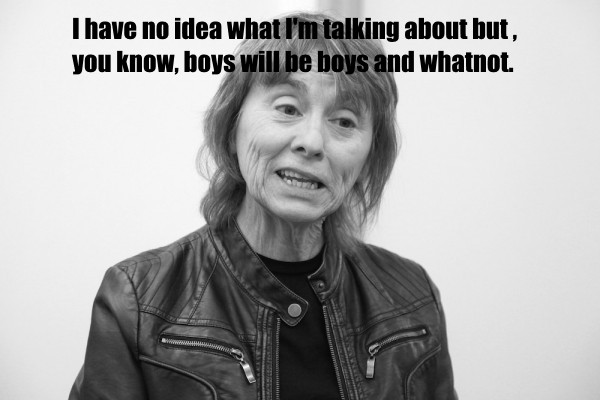 So Camille likes to press buttons and say controversial things. Mostly I just ignore her because I find that her wackadoodle thinking has little intrusion on my daily life, but heck if this story wasn’t linked to all over the place.

So of course I read it, and I find it pretty upsetting, honestly. Of course we can’t pretend that rape doesn’t happen or that other assaults and violence don’t happen, and I’m all for colleges not acting as parents and coddling everybody, but I take issue with things like:

…the majority of campus incidents being carelessly described as sexual assault are not felonious rape (involving force or drugs) but oafish hookup melodramas, arising from mixed signals and imprudence on both sides.

I know someone who was date-raped (well only one person that has told me, statistically I know more than one). It’s a stupid term to even use. It means raped by someone you know. It’s still rape. It’s still traumatizing. It’s still terrible. It’s not just oh, there were mixed signals. The fact that you would even say that, Camille, is really pretty insulting. I’ll come back to this later.

Too many young middleclass women, raised far from the urban streets, seem to expect adult life to be an extension of their comfortable, overprotected homes. But the world remains a wilderness. The price of women’s modern freedoms is personal responsibility for vigilance and self-defense.

I am the first one to say I prefer a more free society even if it means less safe. I hate it when the President makes statements like “My number one priority is the safety of the American people.” That’s not your job, sir. Your number one priority is ensuring my freedom and protecting my rights. However, the fact that the world is a crappy place where terrible things happen is not something we excuse because that’s just the way it is. We shouldn’t accept or excuse it, we should be working to change it by drawing attention to it and how unacceptable it is.

Sex crime springs from fantasy, hallucination, delusion, and obsession. A random young woman becomes the scapegoat for a regressive rage against female sexual power: “You made me do this.” Academic clichés about the “commodification” of women under capitalism make little sense here: It is women’s superior biological status as magical life-creator that is profaned and annihilated by the barbarism of sex crime.

This is just crazy ranting. I’m so sick of hearing about women’s inherent superiority or specialness because we “make life”. Women and men make life together and each has a role. Nobody is magical. Nobody is superior. Rape and rape culture are about power and control, not sexual fantasy.

This to me in summary sounds like she is saying that “boys will be boys”, which is insulting to men, and women should just expect it and protect themselves, which may sadly be true, but is not to be ACCEPTED, or allowed to continue unchallenged.

Finally I would like to raise an important point because it is probably the thing I am the most tired of hearing in all the rape culture and #YesAllWomen discussions (if you can call some of them that) that have been going on lately online. You do not treat the outliers as the norm. The next time I hear someone come up with the “well sometimes women lie about being raped” reasoning for why… I don’t know, we should make sure to keep blaming them for wearing short skirts? – I am going to get violent.

This is the only crime, ever, where this is brought up. Nobody is mounting a “Murderers Are People Too” campaign and making a big deal about how sometimes people lie about being murdered or “The Dog Ate My Homework is Unfair to Dogs Everywhere” support groups for all the dogs wrongfully blamed for eating homework. I’m using that as an example because that’s how ridiculous it is. Nobody ever really says their dog ate their homework. If one person did once, that does not make it the norm. You don’t get to treat all women like the responsibility lies with them for protecting themselves from being raped and assaulted because one time one person said they were raped when they weren’t. You just don’t.

Get it together, folks. And Camille, you don’t know your a** from your elbow, frankly.