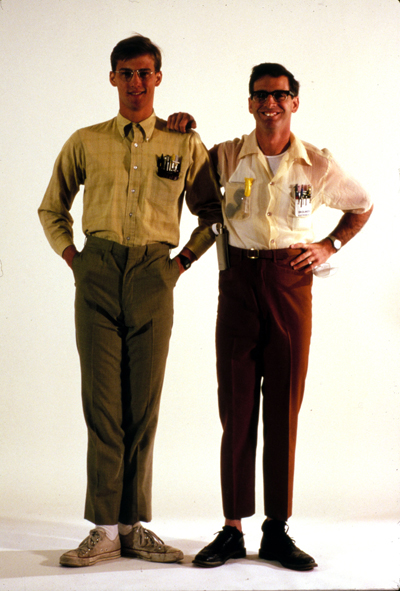 And to think, he grew up to be Dr. Greene. Wonder what happened to the other guy?

I wondered why the baseball was getting bigger…..and then it hit me. Police were called to a day care where a three-year-old was resisting a rest. Did you hear about the guy whose entire left side was cut off? Well!!! He’s all right now. The roundest knight at King Arthur’s round table was Sir Cumference. The butcher backed up into the meat grinder and got a little behind in his work. To write with a broken pencil is pointless. When fish are in schools they sometimes take debate. The short fortune teller who escaped from prison was a small medium at large. A thief who stole a calendar got twelve months. A thief fell into wet cement. He became a hardened criminal. Thieves who steal corn from a garden could be charged with stalking. We’ll never run out of math teachers because they always multiply. When the smog lifts in Los Angeles, U.C.L.A. The math professor went crazy with the blackboard. He did a number on it. The geology professor discovered that her theory of earthquakes was on shaky ground. The dead batteries were given out free of charge. If you take a laptop computer for a run you could jog your memory. A dentist and a manicurist fought tooth and nail. A bicycle can’t stand alone; it is two tired. A will is a dead giveaway. Time flies like an arrow; fruit flies like a banana. A backward poet writes in verse. In a democracy it’s your vote that counts; in feudalism, it’s your Count that votes. A chicken crossing the road: poultry in motion. If you don’t pay your exorcist you can get repossessed. With her marriage she got a new name and a dress. When a clock is hungry it goes back four seconds. The guy who fell onto an upholstery machine is now fully recovered. A grenade fell onto a kitchen floor in France, resulted in Linoleum Blownapart. You are stuck with your debt if you can’t budge it. Local Area Network in Australia: The LAN down under. He broke into song because he couldn’t find the key. A calendar’s days are numbered. A lot of money is tainted: ‘Taint yours, and ‘taint mine. A boiled egg is hard to beat. He had a photographic memory which was never developed. A plateau is a high form of flattery. Those who get too big for their britches will be exposed in the end. When you’ve seen one shopping center you’ve seen a mall. If you jump off a Paris bridge, you are in Seine. When she saw her first strands of gray hair, she thought she’d dye. Bakers trade bread recipes on a knead to know basis. Santa’s helpers are subordinate clauses. Acupuncture: a jab well done