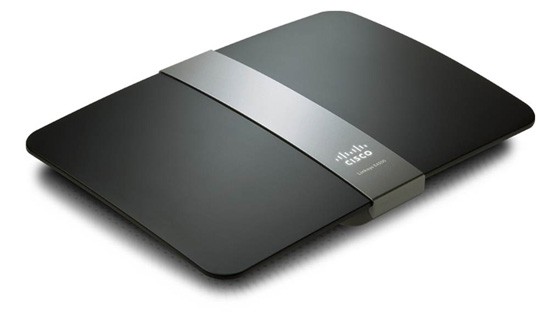 I used to be the kind of guy who thought routers were all the same and anything printed on the box that said it was “supercharged” or some other kind of thing was a total bunch of crap.  So I had the same kind of wireless router everyone else had.  It had antennae like the “BZZZT” thing in Frankenstein’s laboratory and it had some lights on the front.  Fansay.  And it sat there and I made the name of the network “butt-ville” and made the password “yourmom” so when people came over they were embarrassed and that was pretty much it.

But then I was offered the Linksys E4200 and I can now tell you with no hesitation at all that the router you have matters.  It matters a lot.  I found out all sorts of things and I’m going to tell you about them after the jump.  But first the technical deets on the machine (and you can get one here: Cisco Website).

The Linksys E4200 wireless router is perfect for anyone interested in building the ultimate connected home. The E4200 is the first building block that can handle gaming consoles, HDTV streaming video, Roku boxes, eReaders, smartphones, and anything other wireless device that needs screaming connectivity. Also, with back to school fast approaching, now is a great time for parents to make sure their homes are well-equipped for their kids to succeed academically and maximize learning from home to school.  A simple and cost-effective way to make the home an ideal learning environment is to transform the home into a learning hotspot with home wireless.

Today’s middle and high school students have grown up with mobile technology and feel most comfortable in a wireless environment for anytime/anywhere studying, interactive web research, easy collaboration and communication and parent accessibility.  The wireless home learning environment also more closely aligns with how they use technology at school. The Linksys E4200 router from Cisco (http://homestore.cisco.com/E4200) lets parents easily set, use and manage their own home wireless. The E4200 is also perfect for college students setting up wireless in their first home away from home.

My review after the jump.  It is totally worth it.

OK, so I was wondering if I was going to be able to set the thing up right.  See I hate having things like modems and routers and stuff “exposed” in my office.  I want it out of sight and I only want to deal with it if I have to reboot it.  So I have this basket I got at World Market and I put the stuff in there.  I have it plugged into one strip by itself so if I have to reboot it I can do it from a central location and I have one extra wired connection hanging  out the back.  So I redid my whole basket and plugged everything in and did something I usually don’t do.  I read the instructions (since they gave it to me it was the least I could do) and I’m glad I did.

It took 7 minutes to set up.  I timed it.  And during the set up I got an apple.  So it was fast, easy AND healthy.  It doesn’t have any hokey antennae sticking out of it and it is really strong.  I’m going to list out the things that are awesome about this thing now.  It might not be technical but neither are you guys so just pay attention.

The machine does exactly what it claims to do.  And it probably does a bunch of other stuff I don’t know about.  All I know for now is that if you want to take a piece of equipment that you didn’t think mattered and replace it with something you can use for years to come, then get one of these.

Oh, and did I mention I get to give one away????  Well I do.  It’s going to be part of the Halloween Costume Contest and you can win it.  Be excited!  It will be announced this week!