How Many Batmobiles are there? 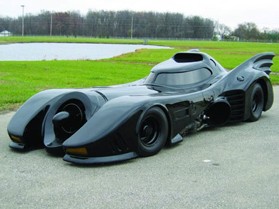 Apparently the best Batmobile ever (pictured) was sold at auction on Saturday for a MEASLY $137k.  Not that it going for more would ever help me since I couldn’t have bought it for $137k either.  According to the story:

DALLAS (Reuters) – Holy Bargain, Batman! The original Batmobile fetched $137,000 at auction on Saturday, a small fraction of the $4.2 million that a buyer paid last year for another version built for the television show that aired during the 1960s.

It was the first time that the 1963 Batmobile, a replica of the sleek black ride used by the DC Comics superhero, was up for auction since it was cast off and forgotten decades ago…

Forgotten?  What sot of stupid idiot would have that car and then get distracted by TV dinners or their stupid kids or whatever and forget that car?  I hate America.  Or maybe I’m just jealous that I didn’t drive past the FIELD IN NEW HAMPSHIRE WHERE IT WAS ABANDONED!

Honestly, I was so mad when I saw this that I cancelled my cable so I wouldn’t have to watch all their shows about jerks robbing suckers of their treasures (looking at you, American Pickers and Pawn Stars).  Full disclosure, I renewed cable the next day because I realized if I didn’t have cable I would have to tell someone that if they asked me and I would sound like a hipster and couldn’t retaliate if they punched me.

OK, so – to recap.  The best Batmobile ever got sold.  I need to creep around in more people’s yards trying to steal their dusty treasures.  I hate the History Channel except for Down East Dickerin’ which makes me homesick.