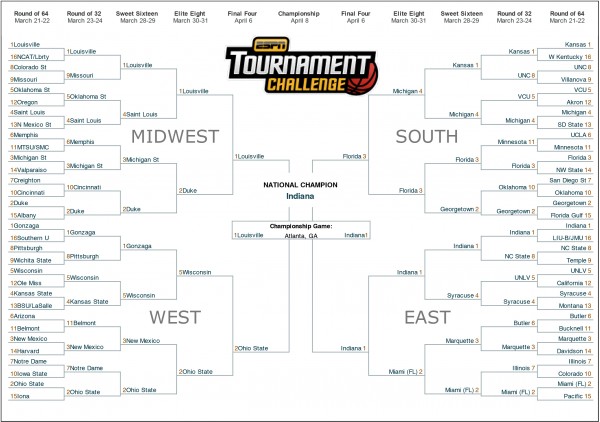 Post a link to yours in the comments. If you beat me you will win something.

I have a confession to make.  I don’t really give a crap about college sports.  I grew up in Maine and went to Fordham.  So unless I was a big hockey fan (I’m not) or partial to thinking about when Vince Lombardi played football (he went to Fordham) I would have had to care about some school I didn’t go to from a state I didn’t care about.  And I just couldn’t muster the interest.

See, like with a lot of things, I find it hard to let go.  If I become a fan of something, I usually don’t change.  So since I grew up in Maine I am forever linked to Boston sports teams (and 0 colleges except for Fordham and they always suck).  And while I like watching the tournament because it is fun, who gives a crap who wins?  I know we all pretend that there could be a huge upset, and sometimes there is in the first or second round.  But it never pans out.  You might as well root for the fat kid with the club foot from District 4.  He might make it a day or so, but you know he’s gonna die.

So since I pay the president, I’m just copying his picks.  He has the FBI, CIA and NSA on his side so I figure he has the best chance out of anyone to get it right.  Doubt me?  Then link me to your brackets in the comments.  I will do some sort of stupid prize.  Or whatever.  Yay America!