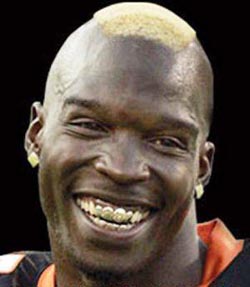 He looks happy, if not sane.

Chad Ocho Cinco says that he is going to twitter during football games this season. I’m not surprised in the least and this sounds awesome.

“you’ll actually be able to follow me and when the season starts, it’s going to get even worse. I’m going to really make it fun. I’m using Twitter during games, during halftime, after the games. I’m going to be taking it to the next level.”

His head coach, however? Bit of an asshole. Always wants Ocho to relax on doing crazy antics on the football field that may take away from the actual, you know, football quality. Please.

Twitter away, Ocho. Can’t wait for the first time when the team is down 21-3 and they run the ball on two consecutive plays for 3 yards, then try an unsuccessful deep pass. Should be hilarious.