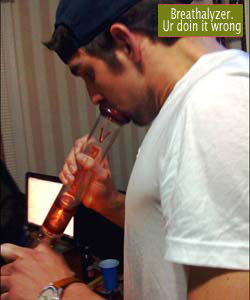 Apparently, Michael Phelps smoked pot.  He admitted it when the picture to the left was released.  It sucks because I am sure a lot of kids who wanted to be swimmers (there have to be lots of them, right?  Kids love swimming!) now see him smoking pot which I am sure will make them want to.  Or at least figure that it is okay to.

Which made me think that this is probably not the first time he has done it.  Which, if that is true, then he won 137 gold metals after having smoked pot.  I mean, probably not the morning of a race, but at some time before that.

So, if he smoked pot and still won, then the pot didn’t make him anything but a criminal.  I am sure there are other ramifications of it, but meh.  I don’t think the Rosetta Stone people are gonna be that mad about it.

Let’s see what happens.  I don’t care either way.  He will still have his restaurant.  And if you are all up in arms about pot in general, remember this hippie poem.