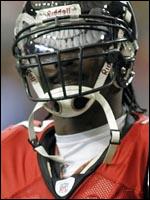 Last night Mike Vick signed a contract with the Philadelphia Eagles. Two year deal. Vick will be reinstated to the NFL sometime before Week 6 of the season.

The move comes pretty much out of nowhere. The Eagles have a strong foundation at QB. Then again, is Vick even a QB anymore? He certainly has a ton of skill left, he just isn’t a traditional QB and time in prison won’t exactly help.

As an Eagles fan, this is one of the rare moments where I’m happy for something the team has done even if it leads to no wins. Most of the time, winning is all I’m really concerned with from the team. But, this, is just a good move. I knew I was going to respect whatever team did sign Vick and decide to give him a second chance. I’m glad it wound up being the team I root for.

This is a bold move as there is a lot of backlash towards Vick. Someone at Vick’s press conference today asked a question to Vick where the lead in was that people were already putting their tickets on ebay. I definitely applaud the Eagles stepping up and offering Vick a second chance when he’s had everyone against him for a long time now.