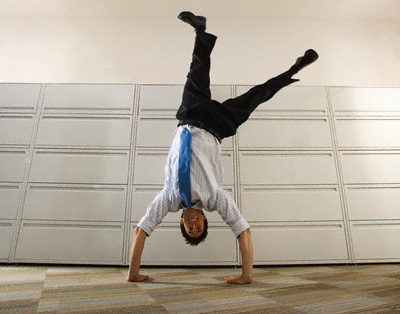 So, you know those commercials where people hunt for laptops in stores and then when it is a PC, the PC folks buy it or whatever. And the Apples are always too expensive? Yeah. Annoying, you know?

Get ready for more of them.

And you know why I know they’re working? Because two weeks ago we got a call from the Apple legal department saying, hey — this is a true story — saying, “Hey, you need to stop running those ads, we lowered our prices.” They took like $100 off or something. It was the greatest single phone call in the history that I’ve ever taken in business. (Applause.)

Yeah, uh, the thing is kind of that people already knew those Apples are expensive as hell. But, you know, if your opponent is pissed off by them, it must mean that you just keep ramming them down our throats. But, last I checked, the people at Apple aren’t the ones out there actually buying the computers. They’re pissed off not because you’re hurting their business, but because you just fucked with their pride a little.

At least, that’s just what I’m telling myself because I hate those damn commercials.