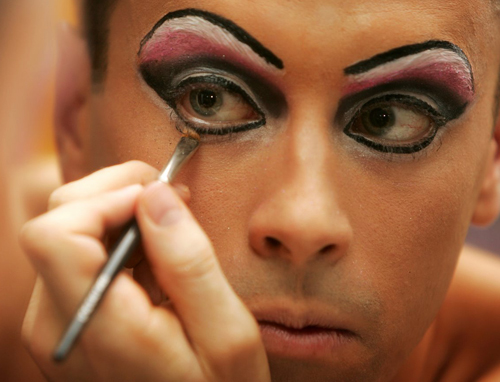 Last night was one of my roommates’ 22nd birthday and, to celebrate, we went to the gay club. Being as it was my first time to the club (or any club for that matter), I got all tarted up. I straightened my hair and had copious amounts of makeup applied to my face and cleavage. That, coupled with my choice of a little black dress and patent stilletto heels, gave me a certain “glow.” But I looked fierce nonetheless.

Fast forward to the club:  We got there just in time for a drag pageant to start. If you’ve never experienced drag in person, let me tell you it is a sight to behold. The ladies were really working the big hair and dramatic makeup angle. Their acts were choreographed pieces ranging from Tina Turner to song and dance numbers from the movie/musical “Grease.” To be quite honest, when it came time to crown the winner, I didn’t even remember her routine. I was too energized and I just wanted to dance. Oh, and dance I did. When the pageant was finally over, they cleared the dance floor; I was out there with my main gays and random gays I met in the bathroom. I was having an amazing time but my feet hurt (damn those killer heels!) so I went to sit down. Here is where it gets really interesting. At this point, who I can only assume was the only straight man in the club sits next to me and starts asking me question after question. Was I straight? Yes. Was I here with anyone? Just my gays. Finally I suggested we dance, but not before taking off my shoes. I believe the song was Beyonce’s “All the Single Ladies,” which I found very fitting for the situation at the time. Eventually a bouncer tapped me on the shoulder and told me to put my shoes back on. Not wanting to dance in heels, I sat down again, and this guy followed. He started asking more questions, but this time far more personal. No, I wasn’t comfortable with telling him where I lived and no, I did not want to go to the back of the club where seating/bar area was. At one point he even offered to get me some beer. I was feeling a definite skeeze vibe from him, so I was trying
to think of ways to extract myself from the situation, and fast. Luckily, one of my gays came along and saved me.

The rest of the night passed without incidence. More dancing, more mingling. At around 3 am, they announced over the loudspeaker that the club was closing. They played one final song (the Cha Cha Slide) and the lights came up. I had just found a seat to wait for my gays to appear from within the depths of club when the creep from earlier comes up behind me and gives me a hug. Trying to be polite I tell him it was nice meeting him, which I suppose he took as a sign to STICK HIS TONGUE DOWN MY THROAT. He ended this little encounter by telling me “I’ll be back next week baby.” Wait… did that really just happen? I didn’t even remember his name, let alone want his tongue in my mouth.

All in all, the night was a fun experience. I met a lot of amazing people (and some not so amazing), and had a fantastic time. If there is a next time though, I won’t be wearing heels. Lesson learned.