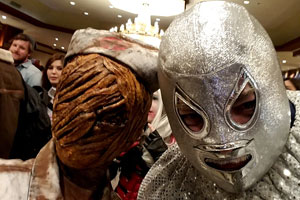 Last Saturday I headed down to Cherry Hill, NJ to check out the Monster Mania convention.  I am glad I did and I have some fun pics down below.  As far as I’m concerned, there are four major parts of a convention, and that’s how my reviews are going to be structured.  Those parts are:

After that I will just give some Plusses and Minuses for people to do with what they will.  So let’s get into the review.

OK so a couple things about my experience before I get into this.  The first thing is that I only went for one of the three days.  In my opinion, it was a one day show but that is because I didn’t see any panels.  And part of the reason I didn’t see any was that I didn’t 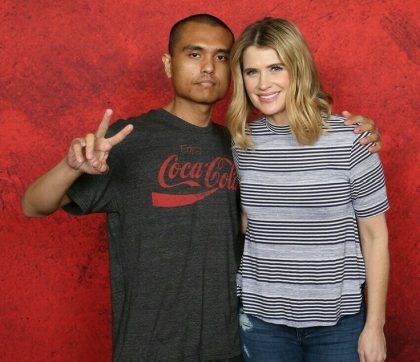 know when or where they were occurring.  But honestly I don’t think ANY con can hold someone for more than one day unless they have people to hang out with or there are takes they want to see that span a couple different days.

The second thing you need to know is that I am a giant chicken and don’t dare to go talk to celebs by myself.  There are two levels of celebs at these shows (imo).  I don’t want to denigrate one batch over the other so I will call one the Workers and the other the Chillers.  The Workers are there to sign and take pics and they usually have really long lines and they make a TON of money.  It is very palpable that they are “working” and while they might be super nice, I get the feeling that standing in line just to say hi without buying anything is poor form.

The Chillers are generally the opposite.  They have stuff to sell, but in a lot of instances they are less known and as a result have more time where they are chilling at their table with their handlers.  They are friendly and approachable unless you are me and get too chicken to go up and say hi.  If I am alone, that is.  If someone is with me then I will go up to anyone.  Not sure why that is, but there you have it.  So who were the notable Workers and Chillers at Monster Mania (full list here).

Honestly the vendors at the show were pretty typical with a few notable exceptions.  You know you are going to see a a million T-Shirt booths (HOW DO THEY DEAL WITH LICENSING MY GAH SERIOUSLY!) and places selling DVDs.  And then there will be some places with some unique goods.  MonsterMania had quite a few of these which was a treat.  You will see which ones I mean from the pics below, but selling real clothing and some obviously hand made items is a great thing to see.  I also am noticing that the fake and creepy taxidermy booths are becoming more popular.  It is neat stuff but I think it is probably targeted specifically at folks who want their room or office to look like a Victorian Era mad scientist.

And the big takeaway for me is that it makes me feel even more like the Gallery/Strangeful Things conglomerate can and should have a booth.  I think it would at least cover costs, you know? 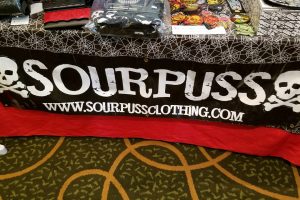 The Crowne Plaza Cherry Hill is a big place and the layout was exceptional.  The whole center lobby area (when not filled with John Cusack fans waiting in line) was spacious and pretty easy to move around in.  They had am easy to access food concession, PLENTY of seating and a big giant restaurant/bar where people could duck in for a break.  I had brought the gallery power strip (came in super handy at NYCC) but didn’t even need it in this place.

And they laid things out nicely.  Think of it as a hub and spoke deal, with signing rooms very far from each other, vendors arranged so that there was a lot of opportunity to get out of the smaller rooms and into the more breathable areas and the ticket and photo op booths placed in logical and pretty easy to get to places.  The only thing I would knock them on is the chaos in the lobby during the Cusack line and the lack of signage.  A few big signs pointing people to major areas and mabe a couple of those posts with the arrow signs could have helped a lot.  But overall, great stuff.

I would guess that maybe 20% of the people at the show dressed up, but the ones that did were pretty stellar.  And a ton of the people at the show knew that my mask is El Santo, which is the way I judge the depth of knowledge of a crowd.  I got stopped for pics maybe 10 or 15 times and one little kid was super thrilled that I said: well why don’t you put me in a headlock if you want a pic of you beating me up!  He looked at his mom who thought it was a great idea.  Kid was thrilled.  That kind of stuff makes me really happy, which is why this pic from Mad Monster Party is my favorite one ever: 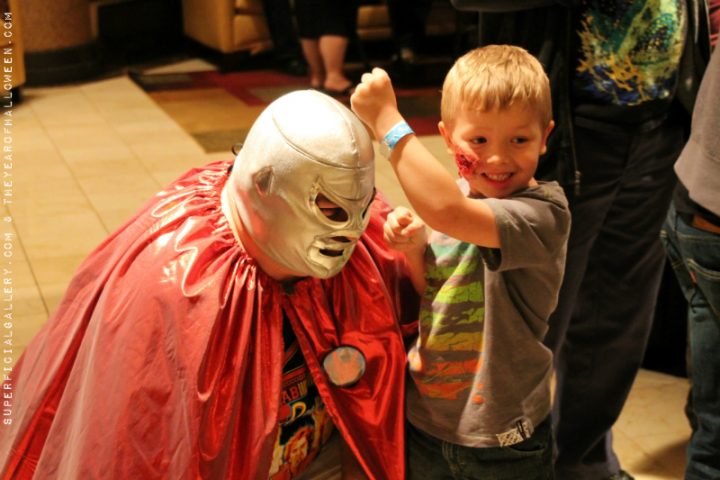 Lots of people in great costumes makes the show more fun.  Check them out in the gallery below.

These are just some things that were outstanding or crappy that did not make or break the experience but could be considered constructive criticism.

For a show I went to at the last minute and had no expectations for going in, this is now one of my favorite cons and I am hoping the Gallery can have a real presence at it.  Good people, good guests and beers when you want them and plenty of places to spend your money (and get something great back in return) makes for a good con.  I give it: 4 out of 5 masks!