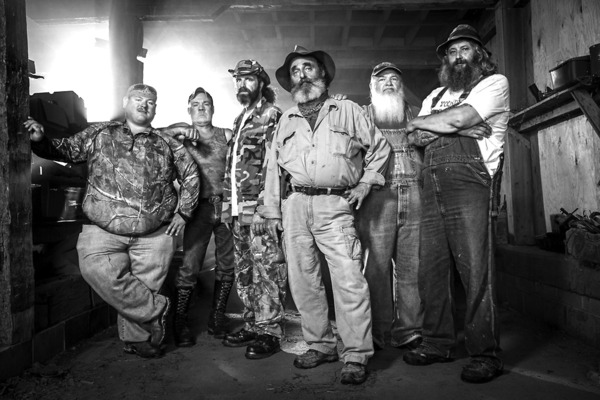 Mountain Monsters is a popular TV show that airs on the Destination America network. The show follows a team of experienced hunters and trappers as they search for mysterious and unidentified (they have names for all of them which I count as identification) creatures that are said to inhabit the Appalachian (They pronounce it wrong in the intro which seems insulting) Mountains.

Each episode of Mountain Monsters focuses on a different legendary creature, such as the Honey Island Swamp Monster, the Mothman, or the Wolfman of Wolfe County (unless they need a long time to get one, or they go back to one they went to before). The team uses a variety of tactics and tools, such as night vision cameras, bait, and tracking devices, to try to track down these elusive creatures.

The members of the team, known as the “AIMS” (Appalachian Investigators of Mysterious Sightings), are all natives of the Appalachian region and have a deep knowledge of the area and its folklore. They include John “Trapper” Tice (RIP), Jeff “Little Bear” Landry (Nobody calls him Little Bear – he looks like a Garden Gnome), Willy “Trapper” (he just builds the traps, you can’t have two people with the same nickname on the same show) McQuade, Jacob “Buck” Lowe, and others (skipping Huckleberry seems rude).

One of the most interesting aspects of Mountain Monsters is the way it blends elements of science and folklore. The AIMS team uses scientific methods (no) and equipment (no) to try to verify the existence of the creatures they are searching for, but they also rely on local legends and stories to help guide their investigations.

Despite the show’s popularity, it has also been the subject of some controversy. Some viewers have accused the show of being fake (they don’t understand), claiming that the encounters with the creatures are staged (gloriously). However, the AIMS team has consistently denied these accusations and maintains that their investigations are real and authentic (ACTING!).

Overall, Mountain Monsters is a thrilling and entertaining show that offers a unique blend of science and folklore. It’s a must-see for fans of the paranormal and the unexplained.  (Wrong!)

In reality, it is a lore-packed ride that is essentially if you wrote a D&D adventure for hillbillies and used cryptids instead of monsters.  If you don’t want spoilers, skip the block quote coming, but otherwise, tell me that they think someone believes this is a ‘reality’ show.

The team is going to the Dark Forest. They have been pursued and doxxed by the “Rogue Team” who apparently killed the Stone Giant (a Bigfoot) in Season One. The Rogue Team chained them in a cabin and told them that if they would go back to the Dark Forest and catch the Woman of the Woods for them, they (The Rogue Team) would tell our guys who really killed The Stone Giant and where the body is. Unfortunately, Jeff (Garden Gnome) has been possessed and they don’t know by what. He is fighting with Buck (heavy guy on left) and it is getting tense!

They have been killing it since Season one and every single hollering doofus on the team is a treasure.  I might need to do like, a watch along?  I dunno.