Murder Made Easy – a Review 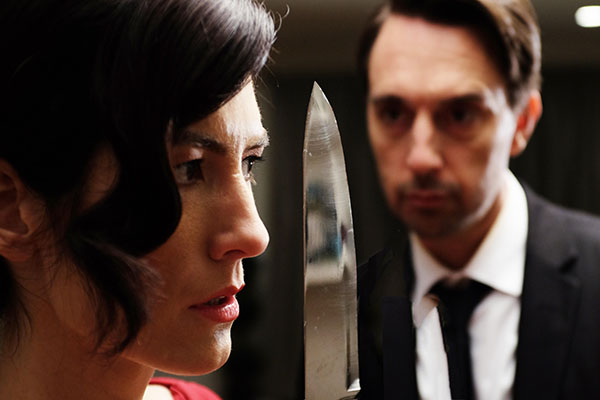 Murder Made Easy is another one of the wonderful movies featured at the 2017 Women in Horror Film Festival and since I didn’t have enough time to see them all, the filmmaker was kind enough to provide me with a screener copy.  I really liked it overall and would definitely recommend it to people who want to like horror but don’t want to be scared.

That’s not faint praise.  Murder Made Easy is not intended to generate dread or anxiety.  Think of it more as a stage play on film in the best traditions of Death Trap.  The movie describes itself as:

Best pals Joan and Michael invite their dearest friends over for a cordial dinner to discuss the passing of Joan’s husband Neil. But as each guest arrives, dark secrets are reveled and murder is definitely on the menu.

…and that nails it. But it undersells the laughs and the swerves on top of swerves viewers should expect from this kind of film.  The main characters Joan (Jessica Graham) and Michael (Christopher Kelley) hold things together with an easy chemistry and charm.  Their encounters are fun. Writer Tim Davis and director David Palmaro do a good job with what i believe are the most important elements of a thriller:

Is it perfect?  Negative.  But the issues are the same ones I have with a lot of mysteries.  There is a quote in The Zoo Story that has always stuck with me:

Sometimes a person has to go a very long distance out of his way to come back a short distance correctly.

And in thrillers, that gets played out to death (no pun intended).  Long runways for reveals are a tradition that I would like to see shaken up.  So I guess on reflection while I write this, I cannot fault Murder made Easy for following the conventions of the genre, and the surprises in the movie are genuine.  So I talked myself out of one of my main criticisms.  Good job, me! Cricket was fun but would have been more fun had her scene been shorter.  Actually, I think all of the interactions could have been a bit tighter, but nothing is so long that it is distracting.

If you can catch this movie, do it.  It is great for a date movie, especially.  Nobody is going to have nightmares about it, but it could definitely cause you to give people you usually trust the stink eye.  And that’s something I think people should do more often anyway.  Just good sense.

Overall I liked it and there was nothing that threw me off enough to ding it too harshly.