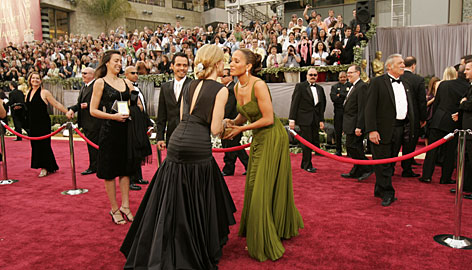 So Holy Crap!  The Oscar’s  Everyone wants to be there.  It’s a big fat deal.  And I am posting from the Oscar’s RIGHT AS WE SPEAK.  Be jealous.  Wonder why I, who know nothing about celbrities, are here while you are home watching Ryan Seacrest.  Well, a big part of it is my general awesomeness, but another is that they are right up the street from me.  But I guess overall it is because they invited me.

The Oscar’s are a pleasant family who invited me over for dinner.  I told them that it was Academy Award night and I would probably be expected to make some kind of fuss about it, but they assurred me that the Harris Teeter chicken was already being rewarmed and that they would not keep me too long.

Mrs. Oscar even told me that I could bring my laptop and do a post from her house.  How cute!  A post from the Oscar’s. So I went over and ate and then Mr. And Mrs. Oscar thought it would be fun to wear what they would have worn had they been at the Awards for real.  She looked stunning.  Mr. Oscar took a lot longer to get ready, and while he did, the wife asked me if, since I was from up North, I had an open mind.  I was non-committal, but waited to see what would happen.  What DID happen was in the pic below.  I am finishing this post and going home.  It  didn’t turn out right at all.  Damn my life is complicated and unrewarding.

Someone hold me.  But not you, Brett Oscar.  You go right to Hell.