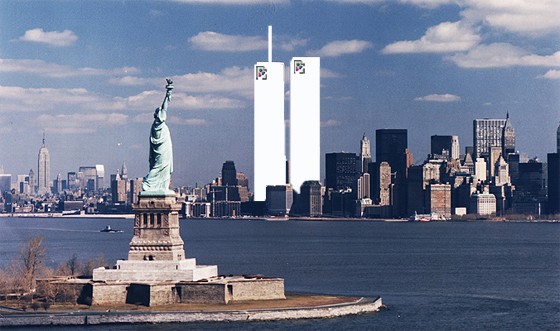 They Broke a Piece of New York.

I was in New York City on September 11th.  I had just started a new job on September 5th (happy 10 year anniversary to me) and I was living in Florida.  I flew up and told people that knew me that I was going to be in NYC but I didn’t know where (I didn’t).

So I was outside 5 Penn Plaza on 8th Avenue.  Madison Square Garden was in front of me and I was smoking a cigarette waiting for my coworkers.  Then some guy out of nowhere said that a plane hit the World Trade Center.  Just like every other story you have heard, all of us on the street (smokers and cabbies) assumed it was a small plane until we heard about the next one.  Then everyone’s faces dropped. We we all looked downtown and saw smoke.

The people I was supposed to be with showed up and we went inside.  The offices we were in faced downtown and we all watched the building burn.  Secretaries and executives and some delivery guy.  We were all just watching.  As it turned out, we were in the same building that CNN was at the time.  So if you were watching CNN that day, you were seeing the same thing I was seeing as they had their cameras on the roof of that building.

I noticed something and mentioned it to the guy standing next to me.  I later found out the dude was a huge bigshot in the company I was at and I had no business talking to him.  But I said:  “Is it burning…down?  Like, is the fire going down instead of up?”

Then it fell down and everyone freaked out.

The rest of the day was filled with trying to find a way back to Queens.  Trying to get cell phone signals.  Hearing crazy reports of car bombs everywhere.  But it was unremarkable overall.  We went to a bar and waitied until someone said we could get off Manhattan.  A guy covered with that white dust came in.  Nobody dared to talk to him, really.

A friend of mine worked for Prudential downtown.  He told me something that I never saw on the news.  The cops were stopping cars on the West Side Highway and stuffing people into them, as many as would fit.  “Get everyone the Hell out of here”, he told me the cop kept saying.  BMW’s and Mercedes crammed full of 7 or 8 people covered with dust.  I always thought that was cool.  Not sure why it stuck with me.  I suppose there are a million stories like that.  And it is easy to get overloaded (especially now).  So I’m not going to pretend that my  experience was unique (there were people I was with all day so of course it wasn’t).  A guy I knew died.  We weren’t close.  All the people I was close with lived.

I think we all lived, anyway, which is what is bugging me.  Those first few weeks or whatever, it seemed like we could do anything.  We were all together.  The whole world was like: wtf!  We got attacked.  Thousands of people who didn’t do anything but wake up and hope they would have a good day and go to work died out of nowhere.  It was cowardly crap and I wish that all our people who died were alive and some random 3000 people in Pakistan who hate us exploded all over everyone around them.  Better them than us, if I was able to pick.

And it was sneaky.  It was like Pearl Harbor.  But 10 years after Pearl Harbor we had won a giant war and already made friends with Japan and Germany again.  And there weren’t computers then.  And the phones had dials and you had to ask for Klondike 5 and whatnot if you wanted to talk to someone and we still managed to whip a continent’s ass.  Granted, we were racist and segregated, everything is tainted in some way, I guess.  But what they did was something that I think would be impossible today for we Americans.

Now we are wowed by technology.  Everyone was talking about how AMAZING it was that some dude was tweeting about the helicopters that flew by his house on the way to kill Bin Laden.  Isn’t the world an amazing place?  Big deal. The people who won World War Two only had pencils and pens to plan things with.  They beat Germany AND Japan.  They had that thing we had in the first few weeks after the attacks, that sense of unity.  But when they had it it meant they were ready to eat nothing but beets and send their men to die.  We all got flags and bumper stickers and told each other we supported the troops.  Saturday Night Live came back on and we acted like France got liberated.

What did we do for the last ten years?  People told us that if we acted any differently the terrorists win, right?  Well I didn’t do anything different, and I don’t think they lost.  If every generation has a war that defines us then this fits us perfectly.  We watched it on TV, were told to go shopping, we got a tax cut and MAYBE we knew someone who knew someone who was in the service.

Did you ever wonder why in World War Two you actually had to BE a hero to get called one?  It’s because back then what we call heroes now they called Ernie.  Or Hal.  Just regular guys who had to go in the Army because there was a lot at stake.  The people in the service now deserve to have their asses kissed by us for a lot of reasons but not the least of which is because the rest of us cannot fathom doing anything like that.  Sacrificing for people we don’t know.  Or for an ideal.  We’re too special.

And we’re fat.  And we fight about “social issues” and we cannot seem to get our heads out of our asses long enough to do something about jobs or energy or anything else.  We can’t do jack.  Politicians can talk about America’s resilient spirit all they want but if they look around they are going to see a bunch of self-absorbed fat asses.  As long as our kids have good self-esteem who gives a crap about anything else, right?  We’re special?  We deserve things?

No, we aren’t.  And no, we don’t.  We’re weak.  We talk about everything we do like it matters which means that when something does matter we probably can’t hear it.  We don’t even have the Space Shuttle anymore.  We don’t have to ask people for directions.  We don’t need to read the paper.  We can play Angry Birds or text people while we take a crap.  Yay us.  In the 10 years since September 11, 2001 we have managed to mess up pretty much every aspect of our country.  And it was because we did what we were told.  We lived our lives normally.  The same selfish, self-absorbed lives we were living on September 10th.

They tell us that September 11th changed everything.  In the opinion of this one person who witnessed but was not injured by the 9/11 attacks, and asking for the pardon of the loved ones of the people who died and all the military people who have died for me and everyone reading this since then, 9/11 changed exactly s***.

I complain when I have to take off my shoes at the airport.  I don’t understand why I have to put my laptop in a separate bin.  I’m an ass.  And, I think it is pretty safe to say that most of you are, too.  Lazy lazy self-absorbed people.

They say that whatever doesn’t kill you makes you stronger.  I guess we died?  Is it too late to change that?  Is there anything you think that needs changing?  Do you know how?  Do  you even want to?  And if you do, are you too busy?  I don’t want to be.  I really don’t.