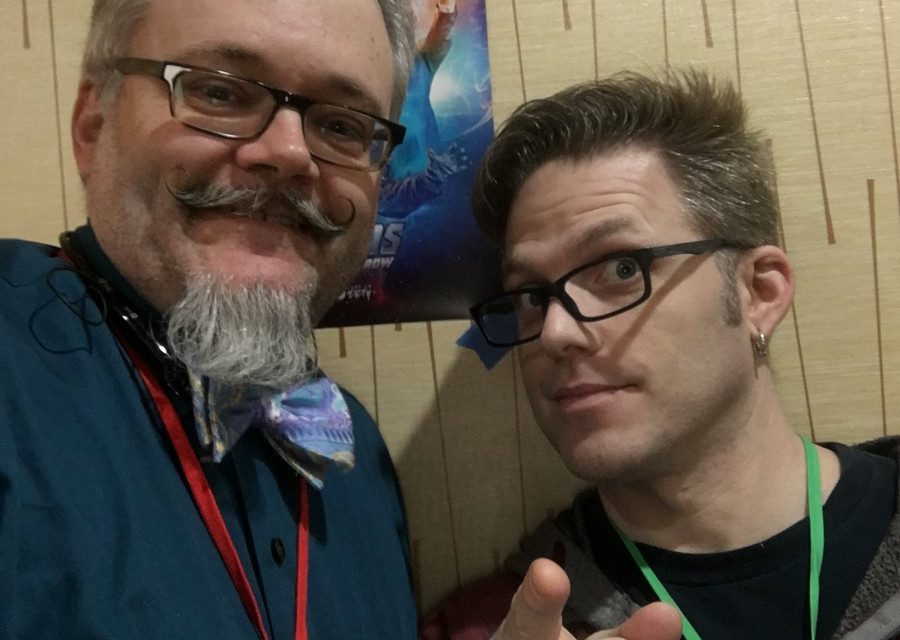 I’m an author, so a lot of the cons I attend have to do primarily with becoming better or more successful at my craft. However, I’m also a huge geek and, as a result, I also like to go to science fiction and fantasy fan conventions, When I can find a convention which does both, so much the better. Mysticon is in Roanoke, VA and happens to be one of the latter. It ran from February 23rd to the 25th. Frequently, these days, when I go to a convention, I do so as a guest. This time, I got a call from my publisher and he asked if I’d like to go to this one as a fan guest. I checked my schedule and then jumped at the chance.

Roanoke is about two hours from where I live, so my publisher Jason Graves and I hopped into the car Friday morning and set out, We arrived in the early afternoon and checked out the schedule to see what sorts of panels they had and what was going on. Since it’s a smaller and relatively young convention, I didn’t expect the schedule to be so packed with interesting topics and people. It was evident from everything I saw the staff had put a lot of love, time, and energy into making sure it was the best experience they could provide.

First, let’s talk about a couple of the guests. The media guest of honor Clare Kramer is an award-winning actress and pop-culture/entertainment correspondent. I had the pleasure of hearing her speak on a few panels and she was every bit as sharp, funny, and engaging as you might expect. I will definitely be keeping an eye out for her future projects. I was also happy to see their author guest of honor was Joe R. Lansdale. I’m a big fan of the Sundance channel show “Hap and Leonard” adapted from his novels. And when I discovered he had written “Bubba Ho-Tep”, one of the most insane and insanely funny movies Bruce Campbell has been in, I was even more stoked to meet him. Mysticon being able to get a talent like this in addition to talented musicians, artists, and even a couple of professional wrestlers told me I was in for a good time.

While I waited for the first panel on Friday, I walked around the halls and got the lay of the land. They had a good sized dealer room packed with all kinds of interesting merchandise, a room dedicated to indie films, and hallways lined with local authors, creators, and representatives from other area cons. I also began to see the first of many talented cosplayers. After opening ceremonies, I headed towards my first panel. A number of talented authors, including Mr. Lansdale, tackled the topic of “Fantasy in a Modern Setting”. As a fan of Urban Fantasy and having written some myself, I was eager to find out what knowledge and suggestions they brought to the table. I wasn’t disappointed. Perhaps the best advice I heard was “The less strange things you have, the stranger your strange things will look.” I don’t remember if this was a purposeful reference to the show Stranger Things, but that’s a perfect example. The groundedness and banality of 1980s suburbia made the truly odd things even odder. It was on this panel I discovered Mr. Lansdale is also hilarious and a great storyteller (which not all authors are). He peppered every appearance with stories from his life relevant to the topic at hand. I also found out he doesn’t outline. That lead to an interesting discussion on plotting vs. “pantsing” and I walked away just a little more jazzed about getting back to one of my current works in progress.

Friday night also included a panel on the 1980s, filled with great memories and nostalgia and one on graphic novels and the history of the comics industry. Lansdale was also a great guest on that panel, given his history of writing for comics like Jonah Hex and Batman. None of these were the highlight of the night, though. I’d run into the hosts of Guardians of the Geekery and they were planning a room party that night. Free beer, pizza and a screening of “Phantom of the Paradise” sounded like a perfect way to end the day. Never heard of it? Imagine Phantom of the Opera meets Faust and a sprinkling of Rocky Horror starring Paul Williams and Jessica Harper and all the drugs a 1970s movie budget would allow. We laughed, we cried, we drank. And just when I thought I was done for the night, I spent over an hour geeking out over Lovecraft with a half dozen other fans/authors. .

The next morning found me ready and raring to go after sleeping in for a bit. After making sure my mustache was waxed and the day’s bow tie was tied, I walked the halls until the first panel I wanted to attend. If you ever go to a con and you see people at tables with books in front of them, those are usually local or regional authors who are trying to get the word out about their wares. Even if you don’t buy a book from them, engage with them and find out what they do. It feeds their soul and you may just find a new favorite. That happened to me when I checked out Rob Richmond and his project “The Tales of the Cloud Ocean” and his band The Vailix. Imagine building a fictional world and then creating a comic book series, two albums, and an art heavy card game around it. Rob’s done just that. I bought one of the EPs and plan on grabbing the game and comics as budget allows. It’s finding people like him which makes going to regional and local cons worth it for me. Sure, I can go to panels about multi-million dollar projects like Black Lightning or Black Panther and I will, but I also get to enjoy new talents before they make it big.

Once I’d bent his ear about the planet Atla, I went on to the panels I’d selected for the day. Joe Lansdale was being interviewed. Given the things I’d already heard him talk about, I knew I wanted to be in on that. I wanted to see what sort of life would build a writer like him. I wasn’t disappointed. Raised in East Texas, he worked in the rose fields there starting at the age of twenty-one. He’d already been writing by that time, crediting his mother for always putting books in his hands. They were poor by any standard, but she made it a point to get him reading. Once, when he was unemployed, he wrote ninety short stories in as many days. Those earned him thousands of rejections (a fact which heartened me), but they helped him find his voice. He told other stories about being on the set of Hap and Leonard, and how he came up with the idea for Bubba Ho-tep. If he got an offer to write something, as long as it interested him, he’d work on it no matter whether or not he’d done it before. He also founded his own martial art and continues to be an active teacher of it to this day. He still writes three to five pages a day and has forty-seven novels and almost eighty comics credited to him.

I followed up that awesome panel with one almost as good. One of the podcasts I listen to and have for years is Geek Radio Daily. A grab bag of fan awesomeness and geek culture, the show hosts include Billy Flynn, his wife Terri “Flynstress” Vernon, Rich Sigfrit, and the mysterious being known as Saucy.  They talked about their geeky activities, including singing the praises of Black Panther and then hosted a unique trivia contest with one of the con’s organizers and the bubbly Clare Kramer. The rest of the afternoon included going to a reading by the publisher and talented author Jason Graves, a panel on macabre fiction, and one on social media. While the social media panel didn’t have anything groundbreaking for me personally, it gave some good information which boiled down to my new catchphrase “keep it relevant, true, and new,” courtesy of Rob Richmond.

The evening for me was capped off by a very entertaining masquerade contest displaying the great costumes I’d seen throughout the day and a few I hadn’t. The action was broken up with comedy from Rich Sigfrit and Billy Flynn as well as some music from the Library Bards. If you like geeky parody songs, then the Bards are well worth checking out. If you don’t, well there’s no hope for you. I was also able to catch a screening of an indie film teaser called Killing Giggles. The comedy was dark and the clown killing action bloody, but I will definitely be keeping my eyes peeled for the feature-length film they’re working on.

Usually, the last day of any con for me is spent on catching up on a little sleep and saying goodbye to friends, old and new. Mysticon was little different in this regard. I did go to a couple of panels. One, “So You Have a Manuscript”, was given by my very own publisher. It was a good opportunity for newer writers to hear how the sausage is made in the publishing world these days. It also provided them with a chance to pitch their ideas to him. I also went to a panel on blending genres. Most of that boiled down to being knowledgeable about each genre and some excellent examples of what to do and what not to do. I agreed with the panelists on Alien and Aliens, but I disagreed with Cowboys vs. Aliens as an example of what not to do. Regardless, it was a great conversation. I said my goodbyes and took a few final pictures, left with the promise to myself I would return to Mysticon in 2019 for sure. I hope to return as a guest, since I feel I have a lot to offer con-goers. Whatever capacity I come back in, I encourage you to come check it out if you’re in the area or even if you’re a few hours drive away.

Finally, so I don’t leave the reader with the notion that this con is for writers only, I feel it necessary to point out there were a lot of things I didn’t avail myself of. Mysticon offered a multitude of tables for tabletop RPGs and board games. There was also an area for playing video games. There were a number of more fan centered panels, including ones on the Marvel Cinematic Universe, Steven Universe, and Sherlock. In addition, there were workshops on cosplay and drawing and even a speed dating opportunity. There was plenty to do for both teens and adults and fandoms of all sorts.