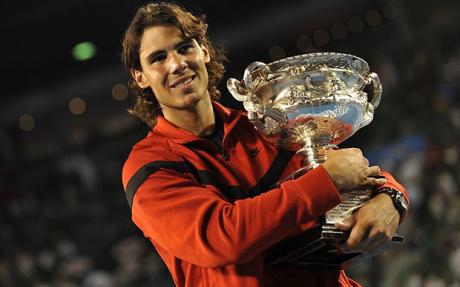 Seriously. Did I really need to be told like five times yesterday by various sports entities some variation of, “Nadal losing today is the biggest sports story.”

Please. Lebron James just lost and didn’t shake hands with anyone. There was a full slate of Major League baseball. Ohio State got beat 37-6 by Florida State in the college baseball playoffs. Zach Grienke actually gave up runs against the White Sox. And, oh yeah, there was Game 2 of the Stanley Cup Finals.

So, please, don’t tell me Nadal losing a tennis match is something people should give a damn about. Hell, the Red Sox moving Jacoby Ellsbury to 8th in the batting order is much more of a story than Tennis.

For the record, I will give tennis its due as a top story of the day only when they play more matches at the top of that hotel in Dubai. That is not asking a lot from the sport. I’m not even making it a qualification that the person fall.