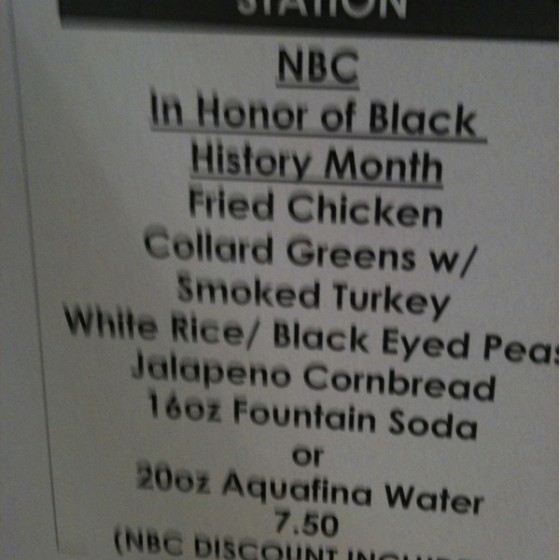 Either the water is underpriced or the soda is overpriced.

Questlove, the drummer for Jimmy Fallon’s band the Roots took this picture and put it on Twitter.  I’m going to forego all the outrage and the jokes based on said outrage.  I’m also going to avoid posing the potentially incendiary theory that the menu could be considered by some to be historically significant for black people.  What I secretly hope is that a bunch of people flip out for real and then they will find out that some black person thought up the idea.  That will confuse everyone.  Also I guess my hope is no longer a secret.

Seriously, though.  I really want to know what you think about this one.  I mean – what if it didn’t say in honor of black history month?  What if it said: by special request?  What if it isn’t really from NBC?  As much as I WANT to believe that it is real, how come they can’t spring for the NBC logo on their menu thingy?  And how much is the NBC discount?  And what if it was Jay Leno’s idea?

so do your bitching in the comments.  Or post ways it could be worse for NBC.  But if you are gonna try to be funny, you better succeed.